Kochi Metro A Watershed Moment For Kerala; But Will It Chug Along? 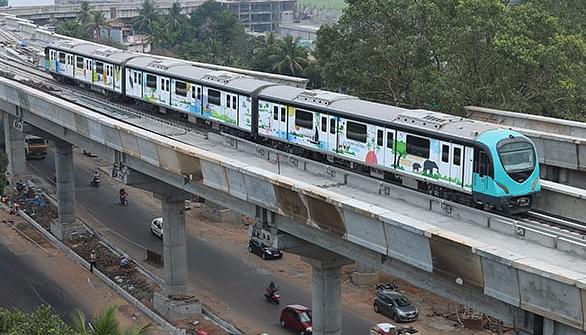 Just a day before the Kochi Metro was inaugurated, the migrant workers of the project were given a special farewell gift: a wholesome Kerala sadya (feast). In a state where the success of a government is determined by its ability to keep state public sector units afloat, and its choice to antagonise ‘private’ companies, most of the work was carried out by private companies (Larsen & Toubro being a prominent example) whose workforce, incidentally, almost solely consisted of migrant workers.

Tracing The Path To The Metro

The metro was a long-standing dream of Kochi, and indeed of Kerala, that was fulfilled on 17 June 2017 when Prime Minister Narendra Modi inaugurated it. The project was envisioned almost 20 years ago by the E K Nayanar government, which contracted the Rail India Technological and Economic Services (RITES) to conduct a feasibility study of a Metro Rapid Transit System. From then on, successive state governments pushed for the approval of the project from the Union government. The V S Achuthanandan-led Left Democratic Front government in 2008 gave cabinet approval for the project, but was denied sanction by the central government. While the Centre proposed a public-private partnership on the build-operate-transfer model, the state government rejected the proposal, based on ideological grounds.

The state government was proposing a ‘Delhi Metro’ model in which the Centre and state would invest in Kochi Metro as a joint venture (one may wonder how much earlier the Metro would have been completed had the state government not been so obstinate with its demands). But this changed soon after the victory of the Congress-led United Democratic Front (UDF) in the assembly elections in 2011. The Congress, now in power in the state as well as Centre, had no problem in adopting the Delhi Model for the Kochi Metro, and the special purpose vehicle for the metro, Kochi Metro Rail Ltd (KMRL) was formed as a joint venture between the Centre and state government.

‘Metro Man' E Sreedharan was drafted in as the principal adviser for the project, almost right after his retirement. While some controversy reigned over the issuing of global tender and the role of the Delhi Metro Rail Corporation (DMRC) in the project, they were resolved, and work began on 7 June 2013. What followed can be considered as an efficient model for the completion of infrastructure projects in Kerala: even projects like the Ernakulam North Railway overbridge, which were not even initially part of the project, were completed in record time. However, Kerala's work ethic eventually affected the progress of construction: Strikes by goods transporters, quarry and crush owners and trade unions. The work was affected to such an extent that DMRC wanted to take up the issue of regional leaders of trade unions interfering in the work, with unskilled workers being paid equal or more than the skilled workers employed by contractors. The commissioning was eventually delayed by a year from 2016 to 2017

Even as the claims have been flying high and low about Kochi Metro being the fastest completed metro in the country, all 25 stations that were to be commissioned as part of Phase I of the metro have not been opened, and only 11 stations in the Aluva – Palarivattom stretch have opened. Meanwhile, a trial run for the next five stations – from Palarivattom to Maharajas happened this July. The next section of Phase I work, however, will apparently only be completed in March 2019.

The metro has also gone an extra mile to attribute themes for all its stations centred around Kerala's culture and geography. A vertical garden is also to be constructed in every fourth pillar of the metro, which has also started the first public bike sharing system in the state.

One thing I noticed when I travelled in the metro was that there was no seat reserved for women, and sure enough, the women's commission has already sent a notice to KMRL about this.

The metro is expected to cost more than Rs 5,500 crore. The Kerala government is to contribute around 1,700 crore, with the Centre to contribute 1,000 crore, the rest being raised through external debt financing. French external aid agency, AFD, is also extending a loan of Rs 1,500 crore for Phase II of Kochi Metro.

But What About Profits?

The main revenue for the metro would obviously be ticket sales, but the metro has plans to generate additional revenue through advertisements and promotional activities. The fare structure, based on the DMRC's 2009 fares, ranges from Rs 10 to Rs 60. According to an IIM-Bangalore study, the metro is primed to break even in eight years of operation. It remains to be seen, however, if the metro will make it. There has already been demands by commuters to reduce fares and increase amenities. Whether the metro will buckle is another question. In the first month, the metro has generated a revenue of more than Rs 4.5 crore and a ridership average of 47,000. KMRL also plans to enter into the lucrative realty sector in Kochi, planning to sell European style apartments.

The profits for the metro are sure to take a hit after the Kerala government decided not to give tax breaks, in view of the new goods and services tax regime. There are indications that the metro may have to wait longer to turn profitable in the wake of this.

Kochi Metro is no doubt a watershed moment for Kerala. It is the first time that an infrastructure project of this scale has been implemented in the state, that too without any major disruptions. There is no doubt that the metro will be a blessing for commuters in the city.

It remains to be seen how far the metro's potential is utilised, since these are still early days for the railway system. Questions remain as to whether it will be sustainable and profitable in the long run.

The author would like to thank Rose Joy for her inputs in this article.