Namma Metro May Save Rs 65 Lakh A Month; Now Is The Time To Consolidate And Make Things Better 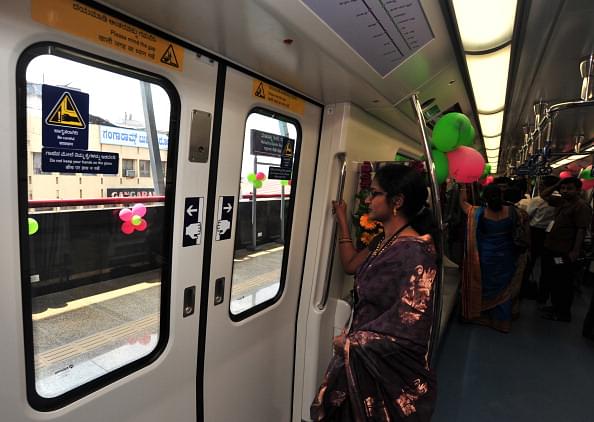 A commuter stands by the door on the Namma Metro in Bengaluru. (Jagdeesh MV/Hindustan Times via Getty Images)

Giving the Bangalore Metro Rail Corporation Limited (BMRCL) a reason to cheer about, the Karnataka Electricity Regulatory Commission (KERC) recently reduced the rate of electricity supplied to the Namma Metro by Re 1 per unit. The BMRCL will now get electricity at Rs 5 per unit instead of Rs 6, and this rate will be applicable retrospectively, from 1 April of this year. KERC also reduced the cost for suburban trains by 40 paise per unit.

BMRCL expects to save at least Rs 65 lakh a month for 65 lakh units of electricity consumed. It has, however, said that there is no proposal to reduce fares for commuters currently. However, it can pass on the benefits to consumers indirectly.

As patronage continues to increase and the BMRCL boosts the frequency of services, the electricity consumption will certainly go up. Along with this, the BMRCL’s plans to increase the train length from three cars to six will mean more energy consumption.

The corporation saw its losses go down from Rs 60 crore in 2015-16 to Rs 41 crore in 2016-17. While it is not clear whether the discounted power is used only for powering trains or for overall infrastructure including the stations, two things are clear: BMRCL must look at alternative sources for power and it must capitalise on its assets in order to generate more non-fare revenue.

Other major cities like Mumbai and Chennai have gone ahead with setting up solar panels atop metro stations to handle electricity requirements for non-train purposes. The 11km-long Line 1 of the Mumbai Metro has solar panels atop all 12 stations and its depot to generate 2.29 MW of power, taking care of 30 per cent of the power requirements at stations. Similarly, the Chennai Metro has set up solar units that would generate 6 MW at all its elevated stations and administrative block. The BMRCL, meanwhile, is still toying with the idea of going solar.

While the cost of a setting up solar power units could be nearly Rs 5 crore per MW. Generating 1 MW would help in reducing the electricity bill by 1,000 units of power. The BMRCL can then choose to either fund the initiative by generating more non-fare revenue or partnering with private players to allow them to monetise real estate within the stations.

The more important thing that BMRCL must be looking at is to capitalise on its assets. The corporation’s biggest assets are the real estate that it holds as well as the footfalls it witnesses. With 3.5 lakh passengers using the service every day, it can very well follow what Mumbai and Gurgaon did in terms of exploiting its assets.

The Rapid Metro Rail in Gurgaon set a benchmark back in 2013 when it auctioned off station naming rights to interested parties, a move that was successfully emulated by the Delhi Metro and then the Mumbai Metro. Apart from this, space within the stations – at the concourse level and not the platform level – has been leased out to various eateries, cafes, banks for ATMs and more on all of Mumbai’s existing Metro stations. While BMRCL has leased out part of a few stations such as M G Road to cafes and parted some land near the Nagasandra station to furniture retailer IKEA, it needs to go the full distance and lease out space at all its stations. The HUDA City Centre station on Delhi’s Yellow Line is a mall in itself. Adding more retail outlets will certainly aid in increasing patronage on the metro itself.

However, the most important aspect of commercialising assets is through advertising by taking a feather out of Mumbai’s cap once again. The Mumbai Metro currently features advertisements on the pillars of the metro, at stations on platforms, between the tracks, on the outer body of trains – also seen on the Gurgaon and Chennai metro – and ads through the public announcement system inside the train. Mumbai Metro One Private Limited expects more than 40 per cent of its revenue to come from advertising and retail spaces, something that the BMRCL must certainly emulate.

The Impact On Fares

While many have demanded that the BMRCL reduce fares, it’s actually a no-brainer as why that shouldn’t happen. The 24-km journey from Nagasandra to Yelachenahalli on the Green line costs Rs 60 (for token users, it costs Rs 51 for smart card users). In comparison, the 25-km journey from Kempegowda Bus Station to Bommasandra on Hosur Road costs Rs 95 on an air-conditioned bus operated by the Bangalore Metropolitan Transport Corporation. It must be noted that metro fares should be compared to air-conditioned bus fares since metro also offers air-conditioned services.

By keeping fares constant for the time being, the BMRCL can start earning more revenue which can then be utilised for future investments such as better amenities at stations and on trains as well as staff salaries. While the revenue is certainly not going to be in line to fund future expansions, it can help offset the cost by a small margin, which in turn would be akin to passing on the benefits to the commuter.

In the short term, keeping fares as they are will help insulate commuters from the effects of drastic fare hikes. When the Delhi Metro Rail Corporation showed that its long-delayed fare hike resulted in ridership dipping significantly, it came as a wake-up call to other operators. While periodic fare revisions are needed to allow the system to function efficiently and prevent shock due to drastic hikes, offsetting the fare hike with non-fare revenue can help insulate commuters from the hike itself. The BMRCL – while it does need to revise fares on a real-time basis – can keep the margin of revision low enough for commuters to not be affected much.

The time is ripe for Namma Metro to scale new heights, and one hopes that the corporation does not miss out on the opportunities that lie ahead.