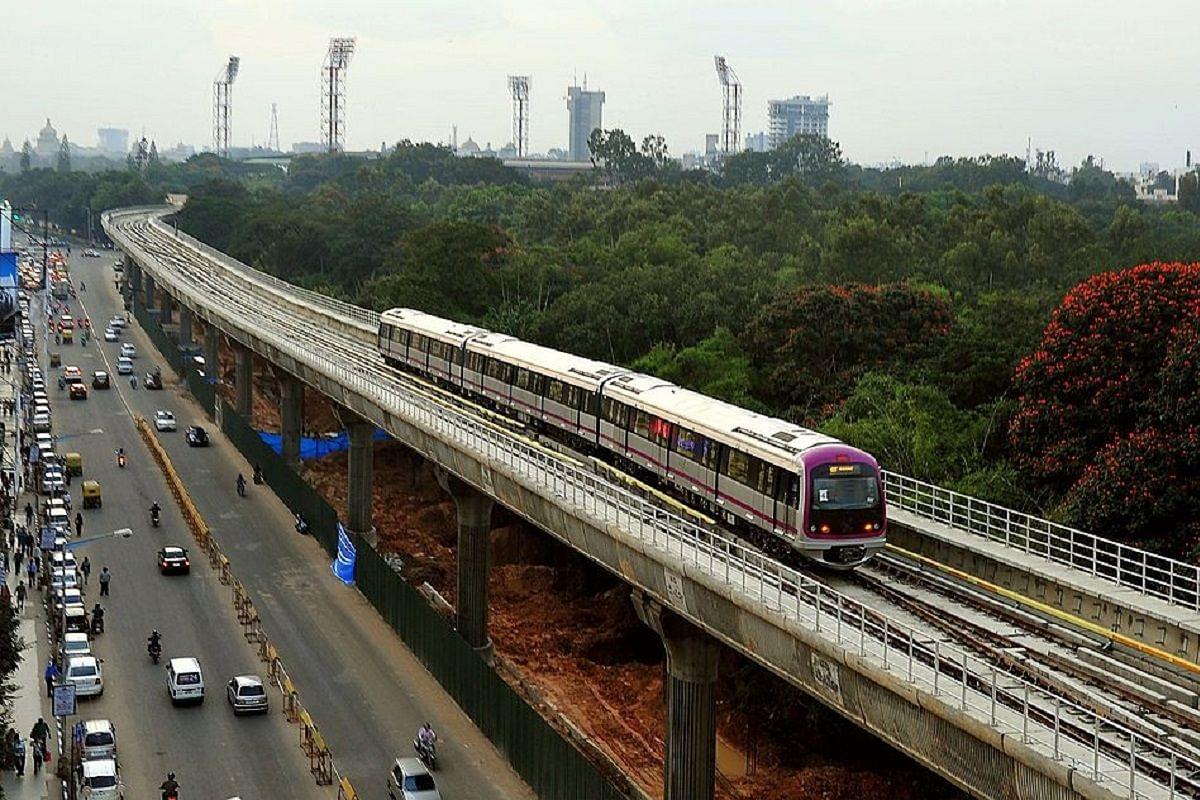 With Bangalore Metro Rail Corporation Limited (BMRCL) sorting out a few pending bottlenecks with Railway authorities, the 15.25 km elevated line between Baiyappanahalli and Whitefield is set to be open in Dec 2022.

Under a swap deal, Railway Board has approved the transfer of 3500 square metres of land that BMRCL required near KR Puram station to widen the road between Tin Factory-KR Puram towards Marathahalli -Whitefield while the Railways will be handed over an equal portion of land in lieu of it.

As part of the road widening, most of the buildings on a one-km stretch from Outer Ring Road (ORR) flyover to KR Puram Railway station will be partially demolished, while a few will be completely razed. Work on the other side of the road, from the under-construction KR Metro Station to the petrol bunk near the Tin Factory foot-over-bridge, has already been completed.

Bengaluru Railway Division has given the go-ahead to BMRCL to build the last piece of pending civil work on the line - a structure running 65 metres above the railway line.

The 15.25 km Purple Line extension project has repeatedly faced delays due to legal wrangling between environmental and local authorities over relocating around 60 trees near Benniganahalli Lake.

2. Iblur to be developed as an integrated metro station for under construction ORR-Airport Metro Line and proposed Sarjapur-Hebbal Line

BMRCL is acquiring over 9,000 square metres of defence land to facilitate the construction of an integrated metro station at Iblur on the Outer Ring Road.

Iblur metro station will serve the under construction ORR-Airport metro line and the proposed Sarjapur to Hebbal metro.

"As per the ongoing ORR-Airport metro project, the metro station will come on the median of the road. Considering the future plan, the engineering section has recommended the acquisition of over two acres of land for integration. "We have already started the process with defence authorities on acquiring the land," The Hindu quoted a BMRCL official as saying.

During his recent budget speech, Chief Minister Basavaraj Bommai announced a 37-km metro line between Sarjapur and Hebbal via Agara, Koramangala, and Dairy Circle to be developed at the cost of ₹15,000 crores.

The work on constructing a 58.19 km long ORR-Airport metro line connecting Central Silk Board with Kempegowda International Airport is fully underway, and this will be completed by Mar 2025.

The Detailed Project Report (DPR) draft for the Bengaluru Metro's Phase-3 has been submitted to the BMRCL by Rail India Technical and Economic Service (RITES) Ltd, an enterprise of the Railway Ministry, The New Indian Express reported.

The project, which is estimated to cost around Rs 13,500 crore, will run up to 44.65 km and comprise two elevated corridors with 31 Metro stations.

Corridor One will run for 32.15 km along the west of Outer Ring Road from J P Nagar IVth phase to Kempapura with 22 stations.

On Apr 11, BMRCL invited tenders to appoint a consultant to create a Detailed Project Report for the 37 km Hebbal – Sarjapur metro line, another line proposed as part of Phase 3.

The scope of the contract includes the preparation of a detailed Project Report (DPR) for the Metro Rail Corridor of 37 km connecting Sarjapur to Hebbal via Agra, Koramangala and Dairy Circle.

At least 14 bidders have evinced interest in taking part in the tender to prepare the proposed DPR.

On Apr 24, BMRCL invited tenders to procure 72 new coaches for the 73.92 km Bangalore Metro Phase 2 project. The selected firm will have 243 weeks to supply 72 coaches.

In Feb 2020, BMRCL had awarded China's CRRC Corporation Ltd the contract to supply 216 new coaches from the Bangalore Metro Rail Corporation Ltd for the 73.95 km Phase 2 project. CRRC was required to provide 216 coaches within 173 weeks.

c) 2 extension to Green Line: 6.29 km between Puttenahalli) and Silk Institute (Anjanapura) was inaugurated on Jan 2021, and 3 km between Nagasandra and BIEC is under-construction.

CRRC committed to manufacturing 204 coaches in Sri City, Andhra Pradesh. But the project has not taken off.

126 coaches were slated to be deployed on the purple and green lines. 90 coaches were earmarked for 19.14 km Yellow Line.

BMRCL has clarified that it does not plan to cancel the CRRC tender and the new tender for 72 new coaches is a backup plan.

It remains to be seen if the delay in procurement of coaches will impact the opening of the yellow line.

The Karnataka High Court on Apr 20 allowed BMRCL to cut or translocate trees for the under-construction Metro Phase 2B between Kasturinagar and Kempapura of the ORR (Outer Ring Road) line. BMRCL had sought permission for the removal/translocation of over 1300 trees.

In Dec 2021, the High Court permitted the Bangalore Metro BMRCL to cut 577 trees, translocate 212 trees and retain 44 out of 833 trees between the Central Silk Board and Kadubeesanahalli stretch of the under-construction Phase-2A of the ORR (outer ring road ) Metro project.

For the overall project, BMRCL has approached the tree officers (DCF) for the removal of 2115 trees to build elevated corridors, 13 metro stations, widen the road and shift utilities. The identified trees are located on a stretch of 19.9 km from Central Silk Board to KR Puram (some up to Baiyappanahalli depot).

According to the BMRCL proposal submitted to the tree committee for approval, 2115 trees were surveyed, out of which 1257 will be felled, 780 will be translocated, and 71 trees will be retained on the site.