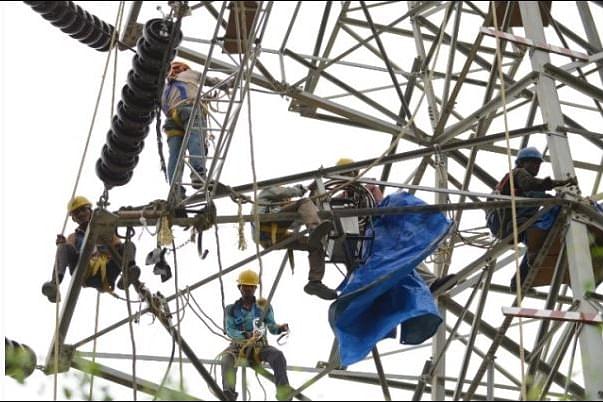 As India transitions from peak summer heat to initial monsoon months, a constant problem large part of urban India has to deal with is power supply failures. Announced and unannounced power cuts accompany every heat wave, the first shower, and strong gusts of monsoon winds across the country with uncanny predictability.

India boasts of an installed power base of over 343 gigawatts. Indian power generation capacity is much higher than the current demand, residential, commercial, and agriculture, put together. And yet, the residential customers seldom enjoy 24x7 power supply.

This strange contradiction is frequently a matter of raucous media and social media debates. The buck stops at what the last mile power supply companies – usually the state electricity distribution companies or discoms – can or cannot do. These discoms have a history of financial and operational blunders, which have been compounded by reckless subsidy-politics. The Ujwal Discom Assurance Yojana (UDAY) programme has helped these discoms stutter back to sanity and common business sense over the last three years.

Yet, if urban India has to see 24x7 power supply, two things need to be done.

Firstly, the electricity transmission capacity and better matching of generation and consumption geographies has to be done. The Narendra Modi government has already done a lot of work on this count. India’s transmission capacity measured in circuit kilometres is up 25 per cent since this government took over. This is an area of ongoing improvement and will eventually cease to be a bottleneck.

Secondly, the discoms need to ensure several things. The infrastructure starting from local substations to a consumer’s home is all maintained by the discom. Substations, local power lines, transformers, and electricity metres are discom properties. And this is where the major blame lies. This infrastructure is creaky and frequently blows up at the first sign of adverse weather. There’s also the usual apathy, bureaucratic delays and corruption at the state level, which mars a critical consumer-facing operation.

World over, consumer-facing companies are racing to use the power of technology to bring better customer experience. Indian state discoms, however, remain stuck to their old moorings. Barring some states like Andhra Pradesh, Gujarat and Maharashtra, most discoms have to cover a big distance to frontier. This is where a national discom comes in.

The Economic Times reported earlier this month that the Union Power Ministry was indeed considering such an idea. The idea itself is not new. Veteran journalist Shankkar Aiyar had written about such a set-up as early as February 2015. What can a national discom achieve?

Currently, every state discom performs the same functions, several of which are routine and can easily be “mutualised”. These similar functions are discharged at significantly varying levels of maturity by each discom. Each state discom has widely varying cost structure with widely varying competence to perform the same function. A national discom can operate a common platform to ensure all states gain from economies of scale and specialisation of services.

Pooling of power purchase agreements (PPAs) and negotiating good, stable power supply rates at a large scale is the most obvious benefit. The PPA linkages can also be rationalised on a geographic basis. The most optimal supply and demand picture can be created, improving the usage and throughput of the transmission facilities.

The use of renewable power can be promoted too. Currently, states float individual tenders, which are not always at a large scale. A national view can change that and provide better purchase visibility to the renewable generation businesses.

Such a national discom can also run technology platforms for all state discoms to use. Such a platform can be used for mundane things like customer billing or for more advance areas like using data analytics for better operational management. A national operation can also help provide consumer touch points like call centres, app-based service with local operations leveraging a common technology backbone.

A clear demarcation of the responsibilities between central and state governments through such a national discom can then lead to achieving the longstanding goal of separating content from carriage. Separating the function of carrying power from one point to another, and finally engaging the customer are fundamentally two different skills. Former is a utility function – every discom need not invest in the carriage. The latter is a customer experience function and the customer should have a choice of providers, which is currently not the case. Except for the industrial open access units, all other customers deal with a monopoly state or private discom.

A national discom would be a true utility. It can own all carriage functions nationally. The discom or discoms, once multiple supply licences are allowed in every circle or state, would simply buy power from the transmission utility and supply to its end customers at the last possible point. The discom would then focus on the customer, bringing value-added services, deploying more technology like smart meters, creating new structures like pre-paid coupon based power supply, new pricing choices like time of day usage, encouraging net metering and solving the real local challenges.

The separation of content and carriage was first envisaged in the landmark Electricity Act of 2003. But it is a political hot potato, even without a national discom in picture. State discoms and their employees will likely oppose this idea tooth and nail – their monopoly position is their bargaining chip.

Structurally, a national discom can attract wider investment for improving power infrastructure. Some of these investments are already made by the central government through schemes like the Integrated Power Development Scheme (IPDS). But the efficiency of implementation of Central programmes at the state level is never guaranteed.

State electricity boards are also a big source of corruption. Employees of these boards are known to establish small equipment manufacturing units and then win bloated contracts for simple items like transformers and cables. A national discom will procure at a scale, formalise the power equipment manufacturing industry further, and reduce corruption by reducing the points of sourcing.

But a national discom is not an easy proposition. The opposition, which has already accused the Narendra Modi government of shortchanging them on issues like equitable distribution of tax revenue sharing, will likely oppose the idea. The good news is that the ruling Bharatiya Janata Party (BJP) dispensation can still push the idea across a large number of states it governs.

When the UDAY programme was launched in November 2015, then power minister Piyush Goyal had worked individually with each state to sign them up. A similar approach may be required here to make national discom acceptable. A key lever to push the idea is part conversion of state discom workforce to central workforce. The central government pay scales as well as general benefits are better than what most states offer.

The biggest benefit of a national discom may however come at the long end of steady state operations – privatisation of the state discoms. Barring Rajasthan under Chief Minister Vasundhara Raje and Odisha under Chief Minister Naveen Patnaik, no other state has got any meaningful private participation going in the distribution sector. Even Uttar Pradesh, which has a super-majority BJP government and a strong Chief Minister in Yogi Adityanath, had to scrap the plans to involve private players in the function.

But once a national discom has operated for a few years, with the state discom significantly right-shifted in the value chain and with limited hyper-local functions, it may become easier for the states to bring private participation.

Outright power distribution privatisation with full separation of content and carriage and market pricing to incentivise the private players to invest in infrastructure would be really ideal. But the really ideal concepts seldom work in the supercharged and binary judgmental world of Indian politics.

Power Minister R K Singh has a unique opportunity to establish a national discom – a less than ideal solution – but likely a great multiplying force to the UDAY-led ongoing discom reform. If UDAY represents a combination of antibiotics and vitamin dose, a national discom, if implemented well, can well be a mild steroid.