People Happy, Soldiers Confident: How Bogibeel Setu Is Ticking Many Boxes At Once 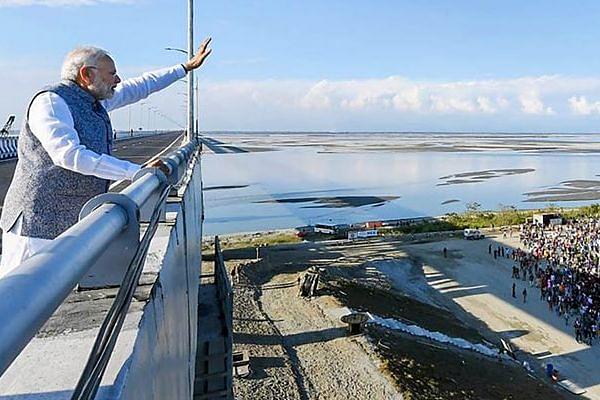 The Bogibeel Bridge, which was inaugurated by Prime Minister Narendra Modi on 25 December last year, has started changing thousands of lives for the better. Apart from enabling easy and fast access to Upper Assam for lakhs of people living in eastern Arunachal Pradesh, this bridge also acts as a crucial force multiplier for the Indian military. And in more ways than one, this bridge — India’s longest railroad bridge — has melded many divides.

For the people of eastern Arunachal Pradesh, Dibrugarh in Upper Assam is of crucial importance. This is where they source all their needs, starting from eatables, cooking oil and toiletries to construction materials and automobile spares, from. More importantly, the Assam Medical College in Dibrugarh, along with some other private healthcare facilities in the city, is the nearest super-speciality medical centre for them.

Until 25 December, getting to Dibrugarh meant crossing the Brahmaputra on river vessels, mostly large barges, that was not only time consuming, but also unreliable. During the monsoons, when the river becomes a vast expanse of swiftly flowing water with treacherous under-currents, crossing the river on ferries was highly risky. Accidents — the ferries sinking or being swept away by currents — was common. During the dry season, the river vessels used to get stuck in the many sandbanks that come up and disappear swiftly, thanks to the unpredictable river currents. And ferries would never operate at night.

Thus, many, like Tamo Mibang’s father Dina, used to die because Dibrugarh was too far away. Dina Mibang, a retired schoolteacher, was a resident of Ruksin, a small town about 34 kilometres west of Pasighat (headquarters of Arunachal Pradesh’s East Siang district). On the evening of 18 April 2016, he complained of a mild chest pain. A local doctor said he had a mild cardiac arrest and advised his family to take him to Dibrugarh. “We rushed my father to the ferry ghat, but it was already dark and there were no ferries. So we had to take a very circuitous route of nearly 220 km via Pasighat, Bomjir and cross the Brahmaputra over the Dhola Sadiya bridge upstream to reach Dibrugarh. It took us eight hours to reach Dibrugarh and my father died on the way.”

On 3 January this year, when Tamo brought his pregnant wife, Banung, to the Assam Medical College, it took him less than two hours to cover the distance of 114 km over the new Bogibeel Bridge. “Had it not been for this bridge, I would have had to admit her to a hospital at Pasighat, where medical facilities are minimal. Since her’s was a complicated pregnancy, it would have been very risky,” said Tamo, the proud father of a baby boy. Both mother and child are doing fine, and Tamo cannot thank the new bridge enough for that. Like Banung’s, many lives are being saved due to this new bridge.

According to Arunachal Pradesh’s Food and Civil Supplies Minister Kamlung Mossang, prices of all commodities in at least seven districts of the central and eastern part of the state have started declining appreciably due to this bridge. In Pasighat, the most important town and gateway to Upper Siang, Dibang Valley, Lower Dibang Valley and Anjaw districts bordering Tibet, prices of most commodities have come down by an average 10 per cent since early this month.

“Cost of transporting all items has come down by 60 per cent to 70 per cent. For bulky items that take up space, the savings in transportation costs is much more. Traders here have started passing on the benefits to customers and in the weeks ahead, as old (pre-25 December) stocks are replaced by new ones, princes will fall more,” said Tahong Gao, owner of a large trading firm operating out of Pasighat.

Thanks to the steep transportation costs earlier — all commodities would have to be transported by the river ferry earlier — most packaged items used to sell at least 10 per cent to 15 per cent above their maximum retail prices (MRPs). This is no longer the case.

Another boon, according to Gao, is that this central and eastern part of Arunachal Pradesh will no longer face any crisis arising out of shortage of commodities. “Even last year, we faced an acute shortage of many commodities when the Brahmaputra flooded its banks and the river ferries suspended their services for a few days. Price of onions, sugar, foodgrains and other essentials shot up by about 30 per cent to 40 per cent. Now, with the bridge, we are assured of around-the-year supplies and at much lower costs,” said Gao. Lower prices, he points out, will also spur demand and, thus, boost trade and commerce in these parts of the state.

Travelling in and out of these parts of Arunachal has also been made much easier due to the Bogibeel Bridge. “We no longer have to make the long and arduous journey to reach Dibrugarh to fly out to the rest of the country. And very soon, we can board trains to New Delhi and other parts of the country without even crossing the river,” said Yalom Tamir, an undergraduate student of sociology at Delhi University and a resident of Anini, the headquarters of Dibang Valley district bordering Tibet.

The opening of the railroad bridge at Bogibeel will ease pressure on this existing route considerably and make upkeep and maintenance of tracks easier. There are also plans to increase the number of trains to Upper Assam and then to Arunachal Pradesh now that the (Bogibeel) Bridge is complete,” said a senior officer of North East Frontier Railway.

The ongoing and proposed construction of rail links to various parts of Arunachal Pradesh will also be speeded up due to this bridge. “It will be much faster, easier and cheaper to transport all the hardware required for construction of these rail projects after the commissioning of the Bogibeel Bridge,” said the NF Railway officer.

The projects that will be directly impacted with the opening of the Bogibeel Bridge are the proposed Silapathar to Aalo (92 km), Pasighat-Tezu-Parashuram Kund-Rupai (225 km), Dangri-Roing (60 km) and Murkongselek-Pasighat (26 km) projects. “We can bring down the time and cost of all these projects now,” said the NF Railway officer.

Anong Mije, 24, a postgraduate student in Bengaluru, remembers missing his flight from Dibrugarh twice because of the suspension of ferry services.

“From Pasighat, we used to travel three hours to the banks of the Brahmaputra to take the ferry to Bogibeel ghat. Crossing the river would take anything between 1.5 hours to 3 hours, and the wait for the ferry upto a couple of hours. And then the ride to Dibrugarh town after crossing the river would take another hour. During the monsoons when the river is in spate, ferry services used to be suspended. Travelling from Pasighat to Dibrugarh was a day-long affair. Now, it takes a little over two hours,” said Anong.

The 4.98 km-long Bogibeel Bridge is sturdy enough to withstand the load of heavy military hardware, including battle tanks and field guns. It will thus be much easier to transport such hardware to the border with Tibet. Movement of troops to the military bases near the Indo-Tibet border has also become much faster and easier, thanks to this bridge.

Mechuka, a small town near the Indo-Tibet border in Arunachal Pradesh’s West Siang district, has a forward base of the Indian Army. Until the commissioning of the Bogibeel Bridge, travelling from Dinjan (in Assam), the headquarters of a mountain division of the Indian Army, to Mechuka used to take more than 20 hours.

“And we could not move heavy armaments over the Dhola Sadiya Bridge since it is not capable of withstanding heavy loads. So a lot of our armaments like the heavy field guns had to be transported through the Kolia-Bhomora Setu that is downstream from Dinjan and then brought upstream again along the north bank of the Brahmaputra. This journey — Dinjan-Kaliabor-Balipara-Silapathar-Mechuka — of about 1,050 km would take more than two days. Now, the distance has been reduced to just 470 km and takes about 15 hours,” said an officer at Dinjan.

This sharp reduction in time for transporting military hardware will assume tremendous significance in cases of emergency. Chinese troops had attacked Mechuka in the 1962 war. Like Mechuka, many other forward bases and posts of the Indian Army along this section of the Indo-Tibet border are breathing easier after the commissioning of the Bogibeel Bridge. Men and officers posted along the border know that they will not be sitting ducks in case of another outbreak of hostilities and that reinforcements are now a much shorter distance away.

The Bogibeel Bridge can also do much more. Five fighter jets can take off from and land on bridge simultaneously. “This bridge has this capacity and has been designed to facilitate such take-offs and landings in case of emergency,” said an Indian Air Force (IAF) officer. As such, this bridge is also a prime strategic asset for the IAF.

Since the bridge can be used as a strategic airfield, it will supplement the other IAF assets like the advanced landing grounds in Arunachal Pradesh. “Availability of more landing grounds gives us (the IAF) more manoeuvrability and allows us greater flexibility in air combat operations,” said the IAF officer.

Story Of The Bridge

The Bogibeel Bridge was promised to Assam under the Assam Accord signed in 1985. It was ultimately sanctioned by the Union government in 1997 and was to have been completed at the end of the Ninth Five-Year Plan (1998-2002).

Ultimately, after repeated urgings by the Assam government and threats of stir by many organisations, prime minister Manmohan Singh granted it a ‘national project’ status in 2007.

However, work still continued at a snail’s pace for another four years and it was only in 2011 that the pace of work picked up. But even then, until July 2014, much less than half the works had been completed: 15 of the bridge’s 42 piers were nearing completion and work on the others had barely begun, while only two of the 44 girders were in place.

The present National Democratic Alliance government sanctioned the required funds and issued strict instructions to the Ministry of Railways to hasten construction of the bridge. Specific timeframes for completing each segment of the bridge were set and top officers of the ministry, as well as the Railways Minister himself, reviewed the progress very frequently.

Given the pace of construction of the bridge under the UPA government, experts say it would taken another 10 years at least to complete. And thanks to all this delay, the cost overrun has been huge: while the initial cost was pegged at Rs 1,767 crore, it ultimately cost nearly Rs 6,000 crore.

But now that the Bogibeel Bridge has become a reality, it is changing people’s lives in innumerable ways. And what’s more, it has become a significant strategic asset that has enhanced the country’s security.