The Mangaluru Model: How An Obsession With Cleanliness Transformed This Coastal Karnataka City 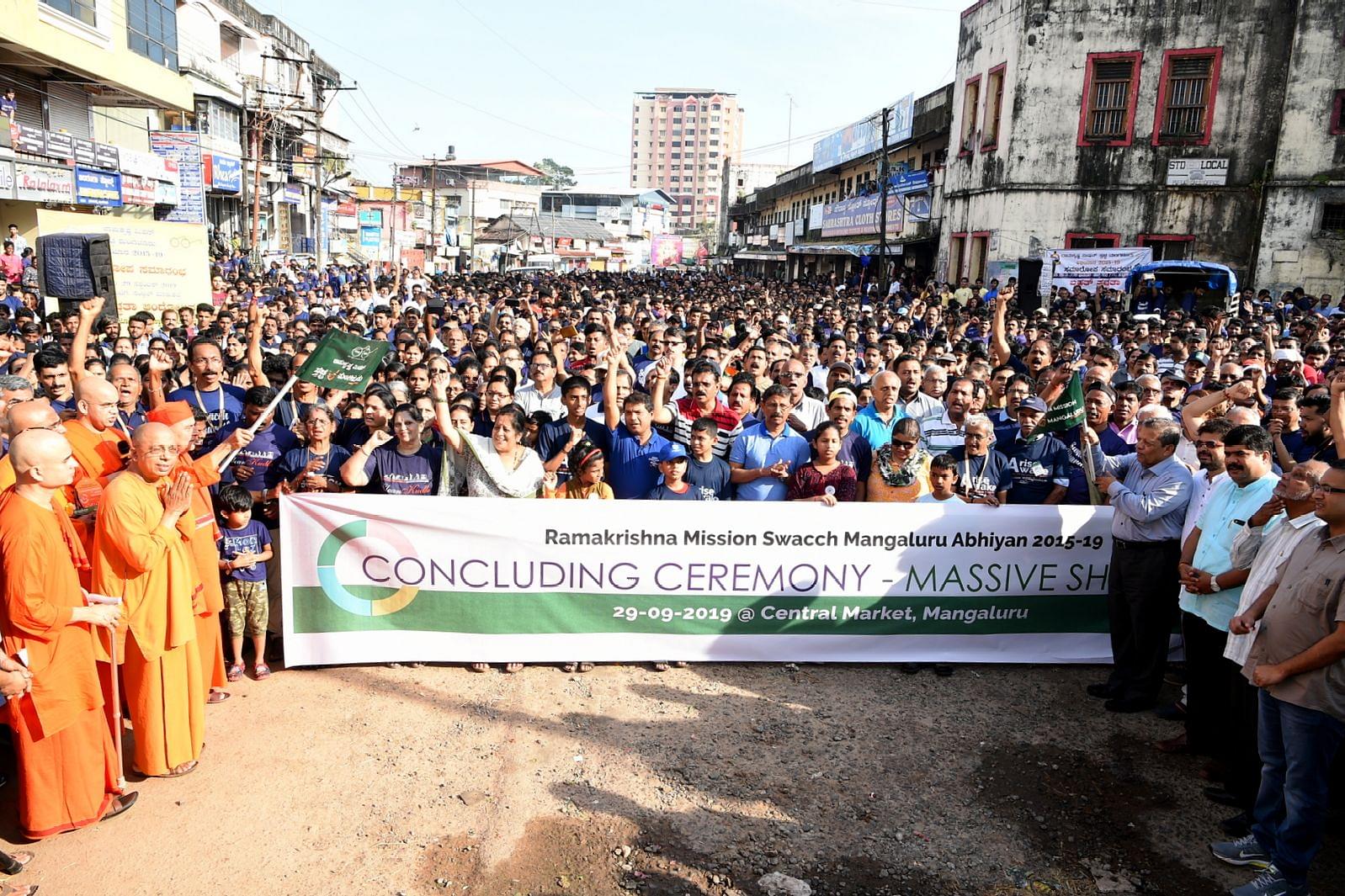 The volunteers celebrate the success of the campaign.

Five years ago, on 25 September 2014, Prime Minister Narendra Modi called on the country to join hands for a ‘Clean India’. Many organisations received a request from the Prime Minister’s Office to join the movement and “sweep the streets clean every Sunday for the next five years”. As Modi himself picked up the broom and swept the streets urging the nation to follow suit, the nation saw everyone jump on to the bandwagon, but many abandoned it in no time.

Among those who took the initiative seriously was this branch of the Ramakrishna Mission in Mangaluru which today has not only heralded a cleanliness ‘revolution’ but also altered the visual landscape of the city.

Numbers tell a great deal about this transformative effort that has changed the way the city looks, feels and smells by the sheer power of ‘volunteerism’.

As more than 250 different organisations joined hands to put in over 20 lakh man hours in this cleanliness drive, resulting in over 200 weeks of ‘Sunday shramdaan’ and around 2,500 different programmes that involved over 10,000 volunteers — 200 villages have now turned into swachh grams.

It all began with a thought that “it cannot be just about sweeping the streets for five years,” says Swami Ekagamyananda, who has led the effort and this team in blue.

“Swachh Bharat was not just about keeping streets clean. It was about creating awareness. An awareness that would then automatically lead to people keeping the city, the country clean and taking the responsibility of ensuring it stays that way. It was about changing the way things have remained for decades now, and also facilitating this change,” says the monk, who has not just led the mission in Mangaluru but also moulded men and women, who have been the torch-bearers of this change.

But doing it in a city like Mangaluru, where, like one of the earliest critics told swamiji, “expecting people to get up every Sunday morning, pick garbage and sweep, when they aren’t really game for stepping out of their homes on a Sunday evening for a community gathering,” was really hard to accomplish.

But the change is visible in the numbers.

The programme was planned in phases with the first taking off on 30 January 2015.

The first few weeks saw just around 40 people turning up for the Sunday shramdaan, which involved sweeping streets and cleaning up areas from 7 am to 10 am. But the impact of this programme was witnessed on 29 September when around 4,000 volunteers descended on Central Market for a mass clean-up.

“Although people wrote off the idea of cleaning streets every single Sunday for five years initially, we had faith that if we persisted, and people see us doing it, especially with no hidden agenda and purely for the city, they would join. And they did,” said swamiji looking back at the five-year journey.

By the end of the pilot project of 40 weeks, more than 60 organisations had come forward to work together. The number then kept rising, and at the last count 250 different groups responded to the call by the mission.

Clad in the saffron seamed dark blue T-shirts that have ‘Swachh Bharat’ written in bold letters across the chest and ‘Arise Awake’ on the back, these ‘men in blue’ have now come to be synonymous with ‘swachhata’ in the city. They have brought down the number of ‘black spots’ in the city that were being used as dumping ground from 800 to around 10.

When certain areas were identified as problem spots, where despite a clean-up, garbage would appear again, the ‘swachhata yodhas’ connected through a WhatsApp group, began to keep vigil. They would watch the offenders, try and convince them not to dump trash, and if they still didn’t agree, would pick up the garbage and drop it at the place of those who dumped the garbage in the first place.

For this, the yodhas would open the garbage bags, find some clue or the other regarding the person who may have thrown it, trace the person and request him/her first to pick the garbage.

Those who refused would be humbly requested, with all calls recorded, and informed about the mission. Some of those who failed to act would then be given a dose of their own medicine, as the yodhas would then ensure the garbage returns to its source.

They also made videos of people throwing garbage and uploaded it on social media leading to the ‘dumpers’ feeling a sense of shame, and generating awareness among people.

“There were people who drove by in luxury cars and flung out bottles, and when our volunteers tried to talk to them, would act rough. Although initially we tried to reason, we then stopped engaging with those who were not willing to listen since it was plain futile,” say the yodhas.

From ensuring no bills and posters are pasted on the walls to painting them all up, furnishing bus stands and redoing parks, one has to see it to believe it.

But despite their best efforts, there were those who tried playing spoilsport, be it health officers, garbage collectors, high-ranking officials or a section of the public. For each of them, the volunteers did whatever it took to get their point across.

The group once picked up all the posters and banners that had been displayed across the city, around 50 of them, and pasted them on the main gate of the city corporation office.

A senior official threatened them with dire action for ‘messing’ with the authorities.

Another instance of a health officer taking offence to the request of the volunteers to ensure a certain area is kept clean was also handled with a strict no-nonsense policy.

“We told these people that we would get the garbage and put it outside their houses — for these are the public servants who should actually be doing what our volunteers are doing. When they are the ones taxing people to do what is essentially a duty, that too when garbage can actually be a revenue generating option, they cannot be spared when they act in ways uncalled for,” says swamiji.

He adds that “aggression is needed but it cannot be the formula”.

“That is what we ensured our volunteers are clear about. That we are working for people not against them. So don’t just get angry and throw garbage in front of people’s houses, for that’s not our agenda. Ensure they understand the importance of what we are trying to do,” he reiterates to a group of volunteers, who were earlier pursuing different jobs but have now signed up as full-time volunteers, and have also planned a start-up in this very direction.

These are men who see how the effort has transformed them in the process of transforming the city.

“Earlier, we would see some spot and say this cannot be cleaned or this issue cannot be resolved. But now we look for ways to do it. From being a part of the complainants we are now part of the solution, and that has changed the way we look at everything. Every situation is now an opportunity,” says Sudhir Noronha, a member of the core team of volunteers.

Organised But No Organisation

The best part of the whole effort was that the only thing that drove everyone who joined hands was the passion about ‘swachhata’. A core team of 200 odd coordinators is the only framework to the effort. No position, no post, no power. For everyone here was a coordinator and anyone who wished to be part of the effort was welcome and would be handed the Swacch Bharat T-shirt.

“People were willing. May be they also wished to do something like this for years. But individually it is not possible. This is where the mutt provided a platform,” says swamiji with a smile as Jagan walks in limping with a broad smile on his face.

Jagan, a physically-challenged volunteer with the abhiyaan, and a part of the core team of volunteers, has inspired many to join the movement, as he keeps vigil on his special two-wheeler well past midnight. Post work every evening he has been visiting various ‘black spots’ and watching out for the ones who chose to err despite endless reminders. Those who have encountered him have apologised for ‘dirtying the city’ and ensured they do not meet him on differing sides of the argument.

But what inspires him to stand there despite his disability you ask and he says “because it is for our city and it feels good to see it clean especially to go back and see the spots that were once dirty all nice and clean”.

The orientation that these volunteers were given every Tuesday at the mutt was the only blueprint.

“Those who do bad things in the world risk it all, go to any length. But well-meaning people don’t take risks because they fear a backlash. But that is where we need to step in. If such efforts and well intentioned actions are backed we can create a different league of leaders and citizens,” says swamiji.

The mutt has now adopted a village in Uppinangady to make it garbage-free.

Having also started a mission to encourage people to handle their own waste by providing pot compost set up at subsidised rates, the mission now looks forward to also incentivising the provision of dry garbage by those who handle their own wet waste.

The compost that has been generated by the setup has been certified by Mangalore Chemicals and Fertilizers as “the best manure”.

As they wound up the five-year mission spending over two hours cleaning the Central Market of Mangaluru which sometime back looked anything but clean, with six JCBs and 16 tippers clearing over 30 loads of garbage, everyone had just one question: “what next?”.

Since the clean-up act has now become almost a ritual, the ‘concluding ceremony’ was a fitting finale but definitely not the end. A meeting has been scheduled for mid-November to decide how to ensure Mangaluru stays clean.

As they echo their guiding thought ‘Swachha Mangaluru Kanasu Alla, Neevu manassu madabekashte’ (clean Mangalore is not a dream, you just have to make up your mind).