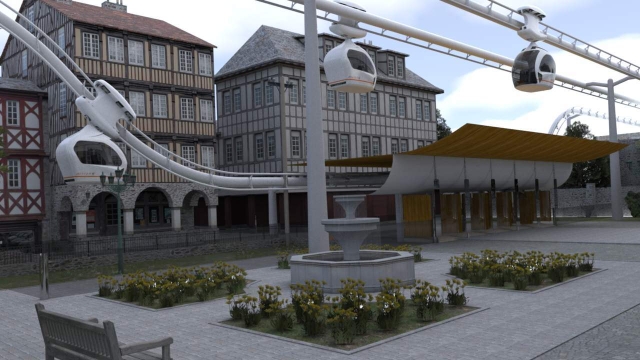 Earlier this month, the Bruhat Bengaluru Mahanagara Palike (BBMP) had approved a pod taxi project proposal involving six lines in the city. The National Highways Authority of India (NHAI) had earlier proposed a pod system in Gurugram, while NITI Aayog has proposed the SkyTran in a new transport policy.

While everyone is naturally excited about the pod taxi concept, there are certain issues with it.

The pod and SkyTran both come under the category of Personal Rapid Transit (PRT) system. Some may use a track system or have a suspended design similar to a cable car. PRT systems are designed to carry not many passengers, usually between two and five people per vehicle. However, as the system is driverless, being completely controlled by a computer, it can handle traffic effectively.

However, the problem of low capacity still persists. As I had written last year on Bengaluru’s proposal to build a light rail corridor (LRT), low-capacity projects aren’t exactly suited for our country’s large cities, which feature high population densities. So Mass Rapid Transit (MRT) seems to be our best bet.

A simple way to understand the basic issues surrounding PRT and MRT systems is if we consider cars and buses.

A regular sedan can carry four people, plus a driver. In the case of a private vehicle, the capacity is five people. In a cab, it’s merely four. If 500 people exit a commercial establishment during peak hours and take a cab, shared among them, 125 cars would be required to ferry these people home. Further, if there are multiple establishments with the same amount of people, the number of cabs would be in multiples of 125.

Now, if we were to replace the same with buses, the situation would be different. A standard bus in India can seat anywhere between 35 to 45 people. Assuming 35-seater buses are used in place of cabs in the previous scenario, 15 buses would be able to carry those 500 people. This would mean a significantly lower number of vehicles on the road, leading to lesser congestion and faster movement of vehicles.

Coming back to PRT and MRT

A PRT is essentially a cab on an elevated rail. MRTs are like buses, or better yet, chains of buses in the same elevated rail. Even Elon Musk’s Boring project is a quasi-PRT system.

While the capital cost of a pod project is pegged at Rs 50 crore per kilometre, compared to Rs 250 crore per kilometre for a metro rail, it is the end result that matters. A 50km line would cost Rs 2,500 crore for the former and Rs 1.25 lakh crore for the latter. However, the larger cost would enable transport of more number of people in a shorter period of time, thus making it truly rapid. Even if the PRT can travel at speeds such as 120 km/hr, it can still carry lower number of people at that speed. The stated capacity of the Delhi Metro is 300 people per coach. Thus, a six-car train can carry 1,800 people at a time. The Mumbai Metro carries 375 people per coach, and the entire four-coach train carries 1,500 people. With 250 services in a day, that results in 3.75 lakh people moved in a day. A requirement mandated by the government for the PRT project was a carrying capacity of 3,000 passengers per hour, one which would mean 600 pods moving per hour or 10 pods a minute, five in each direction, something that may not be feasible.

The only advantage a PRT would enjoy is that due to its smaller size, stations and platforms would be shorter. This would enable for more distances between stations, and enable faster speed. However, the purpose of a rapid transit project is to offer better connectivity, in the form of more stations. The Ahmedabad Janmarg, a Bus Rapid Transit (BRT) system has 126 stations in its 89km network. The Mumbai Metro has 12 stations over its 10km long Line 1 with an average of 750m between two stations. In spite of such distances, it still operates at an average speed of 80 km/hr. Conversely, an MRT enjoys an advantage in a longer platform, which allows it to slow down across the length of the station, thus giving passengers better comfort levels. The speed of any vehicle is dependent on how much it slows down and picks up speed. Metro rail projects fare better in terms of deceleration and acceleration, ultimately giving it a better speed and comfort.

At the end of the day, a project with a high carrying capacity is obviously better than a personalised transit system. As stated earlier, ride-sharing is a superficial solution to traffic congestion, and buses are better suited to relieve the situation. Similarly, an MRT system will always be better suited over a PRT for the amount of money being spent.

A PRT is not useless, however

A PRT can still be used in areas where traffic is relatively low. Places like airports, neighbourhoods in and around industrial or tech parks from where it can link to a metro station or bus station. These areas will not have the same kind of traffic a metro corridor will, and hence can be served better by lower capacity systems that cost less.

Of the six lines that the BBMP has planned for Bengaluru, barring one, all of them are longer than 5km, connecting busy neighbourhoods that should ideally be served by a metro line. Only the section connecting Jayanagar to J P Nagar is actually a good suggestion.

Here are a few places where a PRT would definitely work well:

Electronics City in southern Bengaluru is spread out on either side of the arterial Hosur Road (National Highway 44). A PRT within Phase One of the neighbourhood, connecting to Phase Two across the highway, as well as the proposed metro station on Hosur Road will definitely work. It can further be extended to residential areas in the vicinity.

Bandra-Kurla Complex in Mumbai is the second financial district in the city, spread out between the suburbs of Bandra and Kurla. It houses a lot of important establishments such as the Reserve Bank of India, National Stock Exchange, a family court and the Bharat Diamond Bourse. A cable car has been proposed in the vicinity, but a PRT can be built, connecting it to the Bandra and Kurla railway stations as well as outstation termini, the airport and the upcoming metro station and terminal for the Mumbai-Ahmedabad Bullet Train.

Of course, every transit system, including a metro, is only as good as its planning and route. Bengaluru’s Namma Metro, with 31.52km of it operational, sees a daily ridership of 2.4 lakh while the 10.8km Mumbai Metro sees a daily ridership of 3.5 lakh. The PRT project in Gurgaon and Bengaluru might succeed if routes are planned carefully; otherwise, it would turn out to be a white elephant.