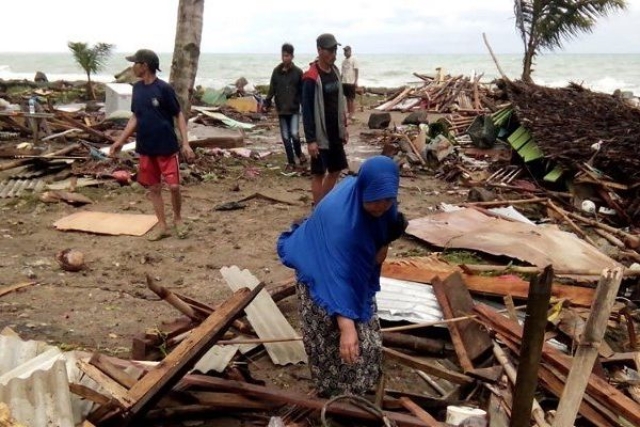 A tsunami triggered by a volcanic eruption has killed at least 168 people and left hundreds others injured in Indonesia.

Indonesia’s national disaster agency spokesman Sutopo Purwo Nugroho said that the wave which hit coast of southern Sumatra and western tip of Java, following the eruption of a volcano known as ‘child’ of the legendary Krakatoa, destroyed hundreds of buildings, as per a Deccan Herald report.

He said search and rescue teams were looking in the debris for survivors. He informed that 168 people were confirmed dead, 745 people were injured and 30 were reported missing across three regions.

The authorities in Indonesia said that the tsunami is likely to have been triggered by the tremendous tidal rush due to the new moon and an underwater landslide following the eruption of Anak Krakatoa.

Gruesome visuals of the disaster have emerged, including a video of the waves crashing into the venue of a concert.

NEW: Video shows a tsunami crashing into a venue in Indonesia where the band Seventeen was performing https://t.co/4P9zDCRkKC pic.twitter.com/q9RYOaPTt8

Parts of the coast around the Sunda Strait were swamped by the wave with the most damage occurring in the Pandeglang district, on Java's western tip, where 33 deaths and 491 injured people have been reported so far.

One of the most disaster-prone areas on the earth, Indonesia straddles on the so-called Pacific 'Ring of Fire' where tectonic plates are known to collide, and a significant amount of world’s volcanic eruptions and earthquakes occur through-out the year.