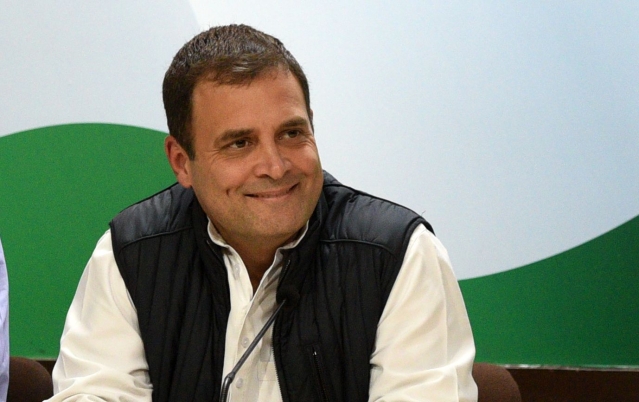 At a time when world leaders are busy banning Masood Azar, the chief of the Pakistan- based terrorist organisation Jaish-e-Mohammad, Congress president Rahul Gandhi has created controversy by calling him 'Masood Azhar Ji', reports India Today.

Rahul Gandhi was seen in a video, that went viral on social media, saying that it was National Security Adviser Ajit Doval who was present when Masood Azhar was being sent back to Kandahar.

Twitterati has been lashing out at the insensitive comment made by Rahul Gandhi. The topic, '#Rahulovesterrorists' is trending on Twitter. Opposition parties, especially the BJP, lashed out at the Congress president.

“Rahul Gandhi's mind is so respectful to the gangster of the terror outfit Jaish-e-Mohammad responsible for the martyrdom of 44 heroic jawans of the country! “ tweeted BJP.

"Rahul Gandhi and Pakistan have one thing in common - their love for terrorists," Irani tweeted.

What is common between Rahul Gandhi and Pakistan?

Their love for terrorists.

"Come on Rahul Gandhi Ji! Earlier, it was the likes of Digvijay Ji who called Osama Ji and Hafiz Saeed Sahab. Now you are saying, Masood Azhar Ji. What is happening to Congress Party?" said Ravi Shankar Prasad.

What is happening to Congress Party? pic.twitter.com/fIB4FoOFOh

However, Congress has reportedly defended the statement saying it was a ‘sarcastic’ comment, implying that the government had helped Masood Azhar escape the country.