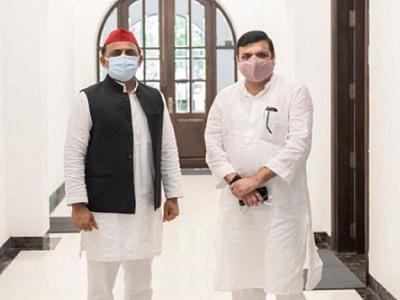 Aam Aadmi Party (AAP) MP Sanjay Singh met Samajwadi Party (SP) president Akhilesh Yadav in Lucknow on Saturday, sparking rumours of a possible alliance between the two parties ahead of the assembly elections in Uttar Pradesh (UP) in 2022.

Singh is in-charge of AAP’s affairs in UP and asserted that he met Yadav only to convey his birthday greetings and talk about the ongoing political situation in the state, Indian Express reports.

However, SP has already ruled out going for any big-ticket alliances with the likes of the Bahujan Samaj Party (BSP) and the Congress for the polls.

Instead, Yadav has maintained that the party will be stitching smaller, strategic collaborations to get their necessary arithmetic right in order to displace Chief Minister Yogi Adityanath’s government.

In this backdrop, Singh’s meeting with Yadav indicates of a possible warming up between the two parties as AAP too looks to expand its footprint beyond the national capital.

Rajbhar has initiated the Bhagidari Sankalp Morcha, which is a coalition of smaller parties representing multiple communities of the state. There was speculation that AAP might become a part of that Morcha too, but Singh had then claimed that it was too early to discuss about any sort of alliances for the assembly polls.