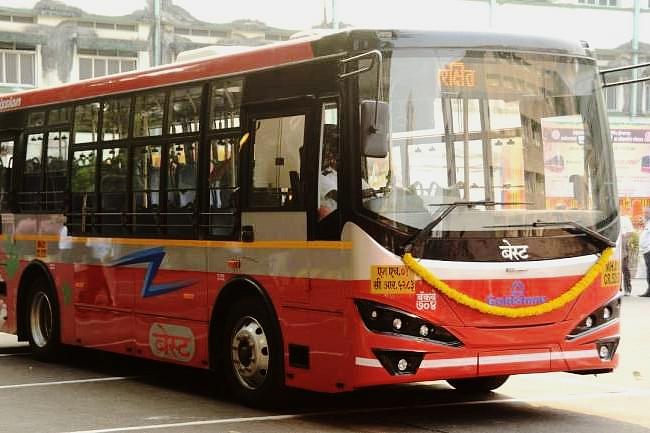 An electric bus operated by BEST in Mumbai (Goldstone buses)

Electric buses have come as a redeeming feature for the Brihanmumbai Electric Supply and Transport Undertaking (BEST) which has been reeling under losses for some time, Hindu Business Line has reported.

The e-buses are typically cheaper to run compared to their CNG and diesel counterparts. While the fuel cost for e-buses is Rs 8/km, the corresponding costs for CNG buses is Rs 15/km, and for diesel buses, the cost comes up to Rs 20/km.

The push to electric buses followed on the heels of a Rs 10 crore investment by parent body Brihanmumbai Municipal Corporation (BMC). While the purchase price for an e-bus is in the range of Rs 1.65 crores, its diesel counterparts cost only Rs 50-60 lakhs. However, e-buses are said to afford longer-term savings as the buses run on lithium iron phosphate batteries which do not require much charging cost as they can cover over 200 km on a single charge.

An e-bus manufacturer also said that owning an e-bus was not as expensive in comparison to purchasing diesel or CNG buses as the government afforded a 60 per cent subsidy under the FAME India scheme. Sounding optimistic about the prospects of this sector, an official from the manufacturing company said that manufacturing and operational costs would soon be competitive enough that incentive from the government would not be required for manufacturing e-buses.