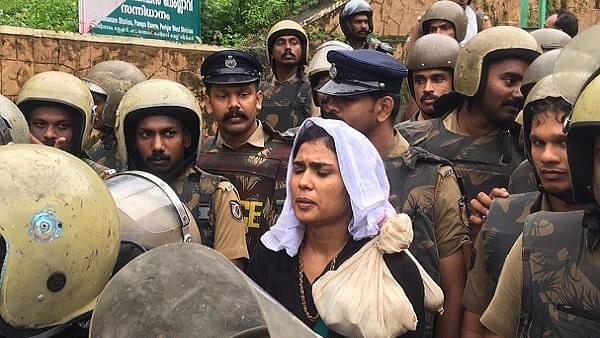 Activist Rehana Fathima who infamously tried to enter Sabarimala along with her associates in 2018 has been sacked by BSNL for hurting religious feelings, Times Now has reported.

The report claims that Fathima has been sacked by BSNL after it received multiple complaints from the public alleging that she hurt religious sentiments.

Fathima who worked as a telecom technician was earlier suspended by BSNL and arrested on charges of hurting religious sentiments over her controversial social media posts.

An IANS report claims that Fathima was under suspension for the past 18 months. An internal BSNL probe found that her Facebook messages had fanned communal tension and she had violated service rules. Her services as a a result were terminated.

Fathima, along with a woman journalist from Hyderabad had tried to enter the Ayyappa shrine in October 2018 despite ardent protests by devotees against the Supreme Court verdict.

She however could not enter the shrine and the Kerala Dewaswom Minister had subsequently called out the ‘activists’ saying that a temple is no place for such activities.

In February 2019 she was jailed in connection with a cheque fraud case and had to pay a fine of Rs 2.1 lakh.