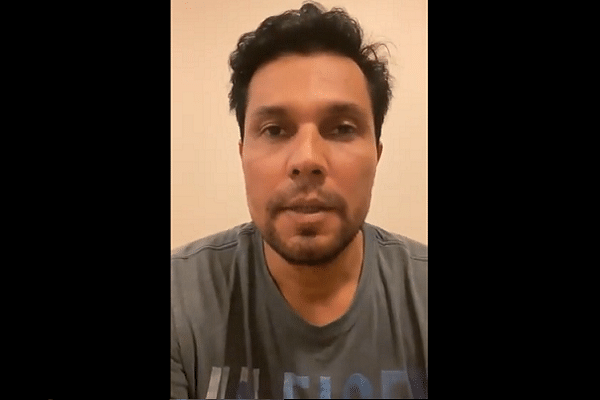 Bollywood actor Randeep Hooda has stepped forward to make a unique plea to the people of Haryana to stay home and maintain social distancing in the fight against Covid-19. Speaking in Haryanavi for effective communication, Hooda delivered his message through a video. He shared it on Twitter.

Hooda requested the elderly folks of Haryana to give up socialising, which, he said, is done with the smoking of "hookah" and "taash" (playing cards), especially in the rural parts of the state. He said that taking a break from smoking the "hookah" would also give the lungs of the elderly some respite.

He even drew an interesting point in this message on Covid-19 in his awareness video. He said that in the absence of a "lipi" (script), the onus of passing the heritage to the younger generations, lies with the elderly. The way to do it is through oral narration.

His message to children was: to stay home; to respect the opportunity and time they are getting with the elders, and to share their messages of the elderly on social media. He even urged them to help the women folk in the household work and ask if they need help or have requirements.

The actor, who hails from Haryana, said that in case the younger folks step out of homes, Haryana police will take care of them with the 'laths', which the men in khakhi have kept ready after spraying (to disinfect the 'lathis'). He said that the youth must not give cops that opportunity and remain home.