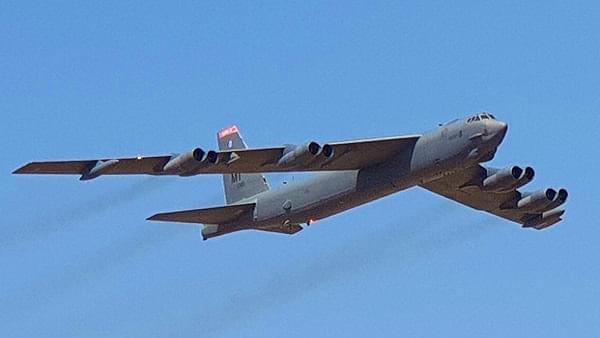 A B-52 Stratofortress Bomber in Bengaluru (Representative image) (@livefist/Twitter)

The five-day Aero India 2019 air show has kicked off in Bengaluru today (20 February), with a number of magnificent aircraft taking to the city’s skies to dazzle viewers, reports Livefist. Also on display at the exhibition were prototypes of indigenous defence offerings.

Some of the notable aircraft that have been seen today at the show are the US Navy’s F/A 18, the B-52 Stratofortress bomber, Lockheed Martin’s F-21, Rafale, Mig-35, Typhoon, among others.

Hereâs how the 7 aircraft that have responded to the Indian Air Forceâs RFI for 110 fighters are present at #AeroIndia2019. Clockwise from top left:
F/A-18
Rafale
Gripen E
Typhoon
Su-35
MiG-35
F-21/F-16 Block 70 pic.twitter.com/os0Egs8zLe

The impressive presence of this assortment of foreign aircraft is in response to the Indian Air Force’s (IAF) ‘request for information’ (RFI) last year to acquire 110 fighters, a contract which could be worth almost $20 billion.

Hindustan Aeronautics Limited (HAL) was also not to be left behind in unveiling indigenous defence technology; a demo simulator of its proposed supersonic fighter trainer based on Tejas LCA was out on display.

The Netra Airborne Early Warning & Control (AEW&C) system could also be seen at the event.

Even as the event seems to have gotten off to a roaring start today, visitors await a number of other wonders to behold in the following four days.