After Notre Dame Fire, Charminar Suffers Damage As Part Of Minaret Falls; ASI Says ‘No One To Blame’ 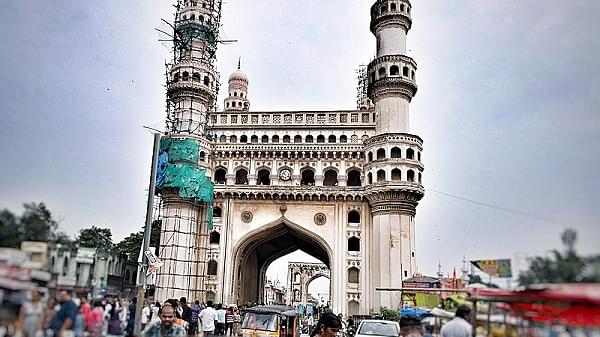 A view of Charminar in Hyderabad. (Wikimedia Commons)

Just days after an accidental fire damaged the iconic Notre Dame cathedral in Paris, a large piece of lime-plaster broke from the south-west minaret of the 428-year old Charminar and fell to the ground on Wednesday (1 May), reports Mint.

According to pictures taken from the site, the lime-plaster comprising eight flower-petals - sized about 2.5 meters/0.8 meters - broke away from the minaret.

India's apex heritage conservation body and the custodian of the Hyderabad-based monument Archaeological Survey of India (ASI) is expected to begin repair work soon after it completes damage assessment.

According to ASI's superintending archaeologist, Milan Kumar Chauley, the damage has taken place due to the monument's erosion over a period of time and that nobody in particular can be blamed for it.

“The plastering on the monument is not original, as it was redone in 1924 by the Nizam (seventh, Mir Osman Ali Khan, the Asaf Jahi monarch of the erstwhile state of Hyderabad). About two decades ago, a similar incident took place on another minaret,” said Chauley.

“I have also been asking the Greater Hyderabad Municipal Corporation (GHMC) to not undertake any heavy machinery work. But I've learnt that they used it to demolish a building a few days ago," added Chauley.

Also Read: What Does It Mean To “Adopt” A Heritage Structure?