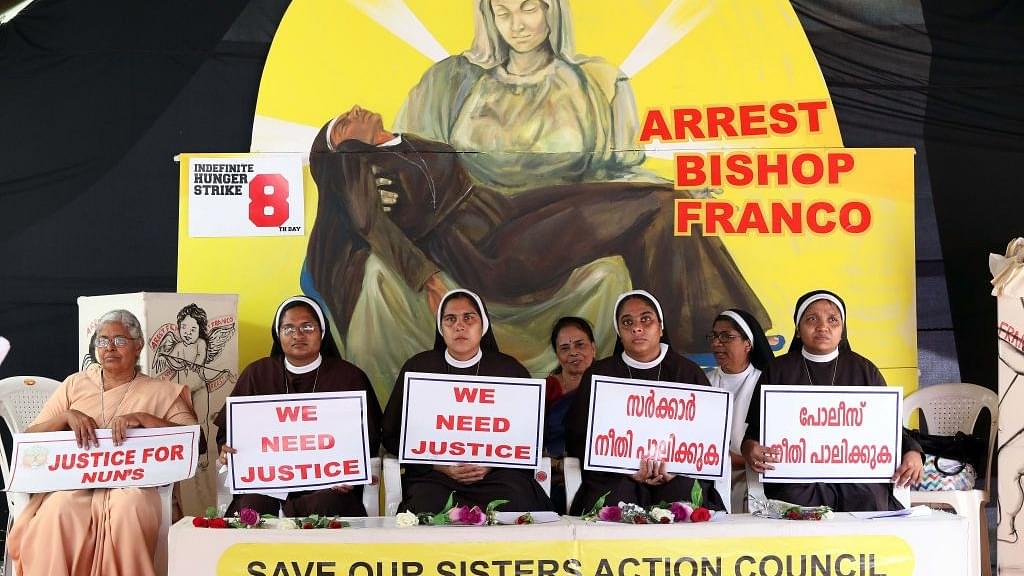 Nuns hold placards during a protest demanding justice after an alleged sexual assault of a nun by a bishop in Kochi, Kerala (Vivek Nair/Hindustan Times via Getty Images)

In the wake of action being taken against the six nuns who are protesting against the rape accused Bishop Franco Mulakkal, the group Save our Sisters (SOS) has warned of further protests, reports Deccan Chronicle.

The SOS action committee reportedly told media persons that a public convention would be organised on 9 February as part of the next phase of protests.

According to the report, the convention would demand the defrocking of Franco Mulakkal and the withdrawal of transfer orders issued to five nuns from the St Francis Mission Home at Kuravilangadu.

The nuns had previously sought the intervention of Cardinal Oswald Gracious, president of the Catholic Bishops' Council of India, in the issue.

Also, the protesting nuns, including the victim, through separate letters to Kerala Chief Minister Pinarayi Vijayan, had asked for the state government to intervene to ensure their safety. They, along with SOS had requested the communist party chief minister that the transfer orders against them be stayed.

“We call upon government to initiate immediate action to forestall the move to transfer them, from their present convent where the government is giving protection, till the trial is completed,” ANI had quoted the SOS in a letter saying.

“The accused bishop is using the power of his current position to harass the six nuns physically and mentally”, Shaiju Antony, leader of the organisation was quoted saying by DC.

The transfer of the nuns amounts to the violation of a Supreme Court's direction on the protection of witnesses.

‘’Defrocking the accused Bishop who is in a position to influence the investigation should be the primary condition in ensuring a fair and transparent investigation," added Antony.

Meanwhile, the SOS has also reportedly approached the Church authorities to ensure the participation of the protesting nuns in the convention on 9 February.