All Hands On Deck For MahaMetro: 19 Km Stretch Of Nagpur Metro To Start Operations By End Of February 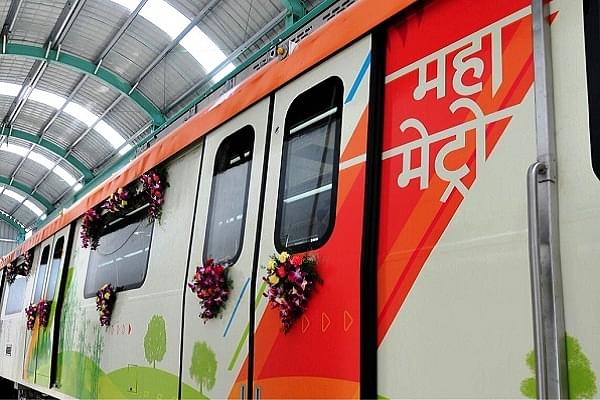 MahaMetro is racing against time to ensure the opening of two stretches of Nagpur Metro totalling 9 km by the end of February, Times of India (TOI) has reported.

The TOI report quoted Managing Director of Maha Metro, Dr Brijesh Dixit as saying that operations on two lines - 19 Km of Metro lines including 13 km stretch from Khapri to Sitabuldi (a part of the Reach 1 of the Nagpur Metro) and another 6 km stretch from Lokmanya Nagar to Subhash Nagar, will commence by the end of February.

Dixit added that all the formalities like certification from Research Design Standard Organisation (RDSO) and Commissioner of Metro Railway Safety (CMRS) will be completed this month.

Dixit also said, around 75 per cent of the physical work for entire metro corridor has been completed and work on the railway track is almost complete from Khapri to Sitabuldi.

There are total of eight stations - Khapri, New Airport, Airport South, Airport, Jaiprakash Nagar, Sitabuldi, Lokmanya Nagar and Subhash Nagar - in these two stretches. However trains can pass via incomplete stations without creating any obstruction.

Airport Station is a metal structure that has been designed and fabricated in the factory premises after which all the components are transported to the site and assembled and erected at site.

The total height of the PEB structure from the ground is close to 90 feet. The total area covered by this structure on platform level is 2,108 square metres. Airport station is the first one on the elevated route. It is a pre-engineered building structure at Metro station with facade works. Construction of Jaiprakash Nagar station is also coming along at fast pace.

Nagpur metro. As it prepares to operates on a much longer route on reach 1 till lokmanya nagar inside city and a part of reach 2 ,CRS approval process has begun. The stations has been built exactly according to renderings,not a norm in India.
PC: moumita majumbar,Pramod ganvir pic.twitter.com/2Ey6EgywtG

The first coach of Nagpur Metro will be exclusively reserved for women and be called as Naari Shakti Coach. Maha Metro has also provided a panic button in every coach for the passengers.

The Phase-2 will cover 48.3 km stretch with 35 stations and will be divided into five segments:

The Phase - II will also encompass rural parts of Nagpur district and will serve as an extension to ongoing first phase.

The estimated cost of the project is Rs 11,260 crore. While Maha Metro will obtain soft loan of Rs 5,890 crore from the foreign agencies, Rs 1,658 crore each will be shared by Government of India and Government of Maharashtra.