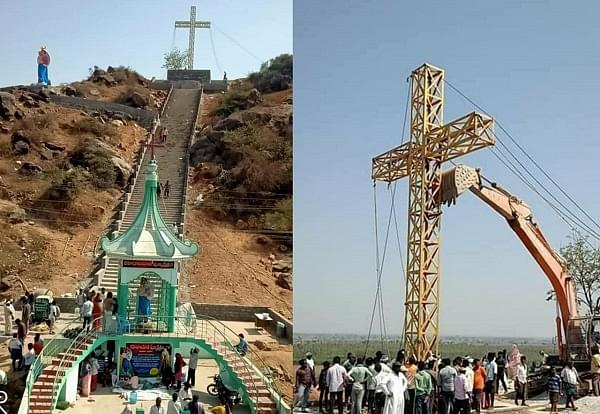 The national secretary of Bharatiya Janata Party (BJP) and co-incharge of Andhra Pradesh (AP) Sunil Deodhar alleged that AP government is in tacit support with Christian missionaries in destroying the Hindu cultural symbols.

He said that a huge cross was installed illegally at Edlapadu in Guntur district of AP where once the footprints of Sita Maa existed.

On this issue, Organiser reported that Hindus in Edlapadu, Guntur District of AP have been performing Marriages at the Sita Paduka (Footprints of Sita Mata). Slowly, Christians came there and started claiming that the hill belongs to Mary.

It is alleged that a top district official who is a christian has extended support to missionaries by ignoring the objections raised by BJP and RSS.

The christian evangelists plan to turn the site, located beside a highway, into a pilgrimage spot.

The growing visibility of christian conversion activities and the attack on Hindu temples of AP is raising serious concerns among the people.

In January 2021, a murti (idol) of Sri Ram was vandalised at the Ramatheertham Sita Lakshmana Kodandarama temple, which is over 1,500 years old, in Vizianagaram district of AP. This incident led to protests across AP by major political parties.