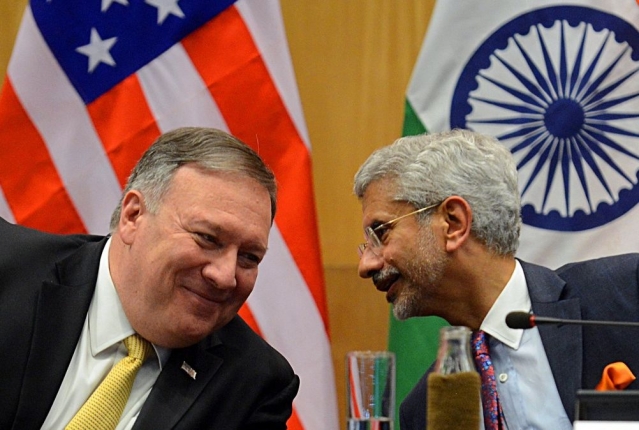 US Secretary of State Mike Pompeo and Defense Secretary Mark Esper will be in New Delhi next week to meet Defence Minister Rajnath Singh and Foreign Minister S Jaishankar for the US-India 2+2 ministerial dialogue.

The meeting, which will come amid the most serious standoff between India and China in over four decades, will send another message to China on the growing convergence between India and the US on multiple issues, including the increasingly belligerent behaviour exhibited by Beijing.

This will be the last high-level engagement between New Delhi and Washington before the 3 November presidential election in the US.

During the meeting, India and the US are likely to sign the Basic Exchange and Cooperation Agreement (BECA) for closer military cooperation.

With the signing of this agreement, Indian and US armed forces will be able to share geospatial information and intelligence. Among other things, the cooperation will help India improve the accuracy of its missiles.

The 2+2 meeting is set to take place just days after New Delhi invited Australia to participate in the Malabar naval exercise with India, the US and Japan. This event will bring together the Quad countries militarily for the first time in many years.

With these moves, including a series of missile tests conducted by India over the last 45 days, India has been signaling its intent to stand up to China, experts say.

That Indian and US ministers/secretaries have decided to hold the meeting in person instead of having it virtually signals the importance they attach to it, China watchers say, adding that Beijing will be watching closely.