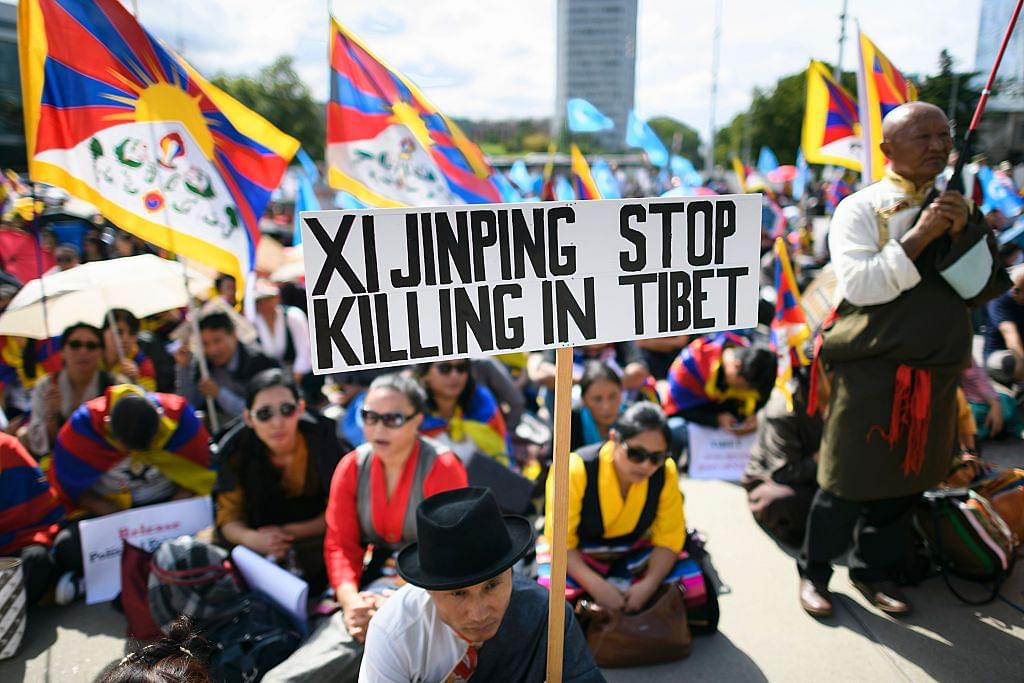 A protester holds a placard reading ‘Xi Jinping stop killing in Tibet’ during a rally involving members of the Tibetan and Uyghur communities. (FABRICE COFFRINI/AFP/Getty Images)

Foreign visitors will be banned entry to the Tibet Autonomous Region (TAR) between 25 February and 1 April by the Chinese government in anticipation of protests by both Tibetans and Uyghurs against Beijing’s continuous authoritarian rule over the area. Such massive protests have been taking place across the TAR since 2008, when monks in Lhasa undertook a march on March 14 that year that eventually assumed the proportion of an uprising.

Despite efforts by China to clamp down on Tibetans within the country and often attempting to coerce other sovereign nations to treat Tibetans, including their religious leader, The Dalai Lama, as ‘terrorists’, Tibetans around the world have continued with their struggle against Chinese-led rights violations in TAR.

During President Xi Jinping’s visit to Switzerland while the Chinese State-owned media proclaimed the visit to be a success, they quietly omitted reporting that during President Jinping’s stay in the country from 15 to 18 January, groups of Tibetans braved freezing temperatures to protest against the ongoing human rights abuses in TAR. Protests were held in Bern, Davos as well as in Geneva during the period of the visit.

On Xi’s arrival in Bern on 15 January, more than 800 Tibetans and Swiss nationals gathered in the city to voice their protest against Chinese policies in Tibet. Later, the Swiss police detained more than 30 protestors when they refused to comply with orders to disperse, and tried to enter what was designated as the ‘no protest zone’.

Prior to Xi’s departure from Switzerland, more than 150 Tibetan and Uyghurs also gathered outside the UN Human Rights Commission headquarters in Geneva, demanding release of their imprisoned brethren and family members by Chinese security agencies, their right to be issued passports and to be free to practice their religion and culture.

Holding placards that said ‘Xi Jinping-Stop Torture in Tibet’, and ‘Freedom for Uyghurs’, these protestors not only tried to catch the attention of the Chinese leader but influential members of the international community who had gathered in Davos for the annual economic conclave.

Protests have also been held outside the Chinese Embassy in London on 27 January, demanding the release of Tashi Wangchuk, a Tibetan detained in China on 27 January, 2016 for featuring in a New York Times article and video about the loss of Tibetan language. Similar demonstrations were held on the same day in New York and Dharamsala. Wangchuk has been charged with ‘splittism’ by the Chinese authorities and could face up to 15 years in prison, if found guilty.

Beijing should realise by now that it is unlikely to win this fight by sheer intimidation.