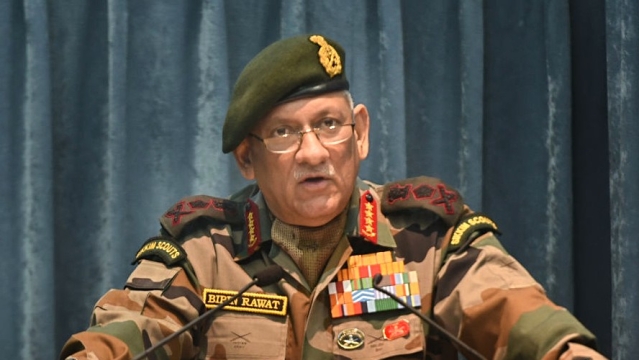 Indian Army Chief General Bipin Rawat has said that the institutions of the country work on the instructions of the government and that if the Centre orders, the Army is ready to take back Pakistan occupied Jammu and Kashmir (PoJK).

Responding to a question on the statement of Minister of State (MoS) in Prime Minister’s Office (PMO) Dr Jitendra Singh regarding retrieving the PoJK and merging it with India, the Army Chief said, “Government takes action in such matters. Institutions of the country will work as per the orders of the government,”

“Army is always ready for any action,” General Rawat responded when asked about the preparedness of Army to execute any such decision of the government.

#WATCH Army Chief, General Bipin Rawat on Union Minister Jitendra Singh's statement, âNext agenda is retrieving PoK & making it a part of Indiaâ: Govt takes action in such matters. Institutions of the country will work as per the orders of the govt. Army is always ready. pic.twitter.com/RUS0eHhBXB

The Army Chief’s statement came after the MoS PMO Dr Jitendra Singh on Tuesday (10 September) said that Modi government’s next priority is to get back PoJK and make it a part of India.

“Next agenda is retrieving parts of Pakistan-occupied Jammu and Kashmir and making it a part of India. It is not only my party's commitment, but it was also part of a unanimously passed resolution of the Parliament in 1994. This was passed by the Congress-led government of Narsimha Rao,” Singh said.