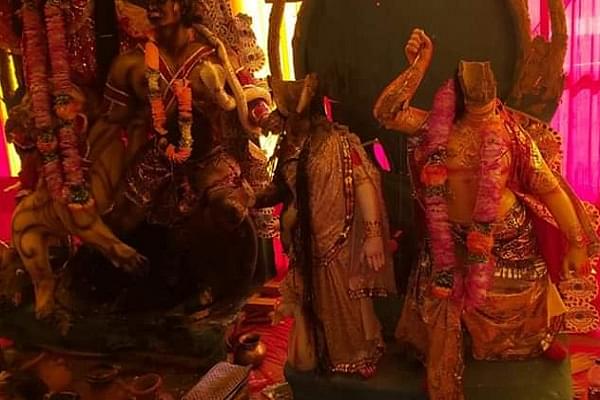 In a shocking incident in Arunachal Pradesh’s Doimukh, idols of the Hindu goddess Durga were vandalised and decapitated at a pandal in a late night attack between 5 October and 6 October, reports Arunachal24.in.

The Durga Puja Mandap no. 2 pandal had been set up by the Doimukh Bazar welfare committee to cater to devotees during the annual festive period of Durga Puja. President of the welfare committee Dobum Robi said that the attack was unprecedented in the town’s history.

According to organisers, the attack has not dampened the community’s spirits and they are continuing with the prayers and festivities with smaller idols.

Three men suspected of being behind the attack have been arrested by police till now. The identities of the accused have not been revealed.

Papum Pare Superintended of Police Jimmy Chiram claimed that the matter was related to a personal dispute and asserted that there was no communal angle to the case.

The news of the incident has sparked widespread outrage, and some social media accounts have mentioned that all the accused belong to the Christian community.