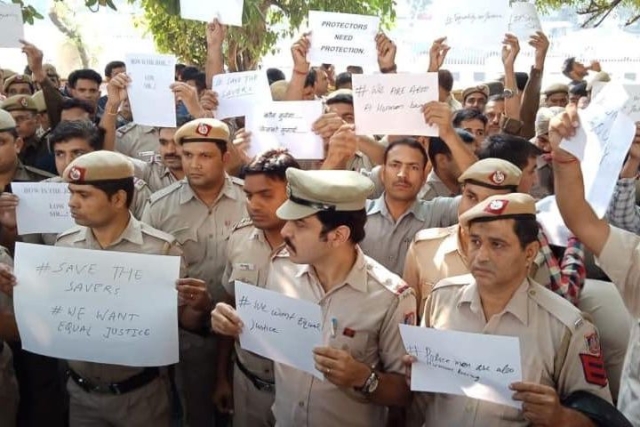 The ruling Aam Aadmi Party (AAP) on Tuesday (5 November) lashed out at the Delhi Police accusing them of having been turned into a political entity that works like an "armed wing of BJP", as hundreds of police personnel staged protests outside the Police Head Quarters (PHQ) in the heart of the national capital.

In a series of tweets, AAP spokesperson Saurabh Bhardwaj, who is also a lawyer, alleged that the BJP has emboldened Delhi Police so much that "we are living in a Police state".

His comment came amid an unprecedented stand-off between lawyers and police in the capital after violence over a parking dispute in the Tis Hazari court complex on Saturday (2 November).

The city government has been accusing the Delhi Police, which comes under the Union Home Ministry, of not being able to manage the law and order situation in the national capital.

"The Police is least concerned about basic law and order issues in Delhi. Police officers are so arrogant. Delhi Police has been converted into political entity and works like an armed wing of the BJP," Bhardwaj said.

He also wished that the Advocates Bar Association had taken stand for the rights of common man. "It's never late to do the right thing," the AAP MLA added.

Hundreds of Delhi Police personnel gathered at the PHQ in Delhi on Tuesday (5 November) to protest against repeated incidents of violence against them by lawyers.

At least 20 police personnel and several lawyers were injured and many vehicles were damaged in the incident. The lawyers alleged that the police fired at them.