Assam NRC: 30 Lakh Individuals Re-Apply For Inclusion; All Claims To Be Processed By June 2019 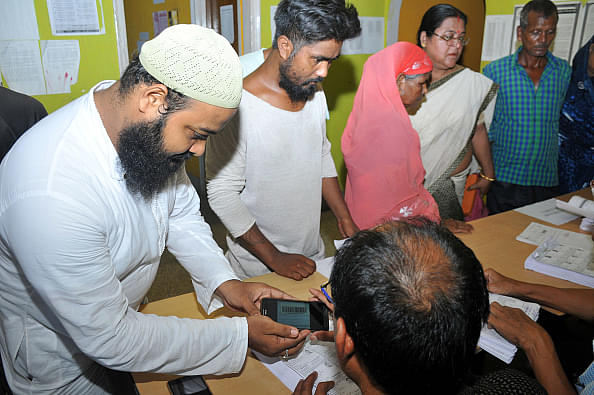 People checking their names in the draft NRC at an NRC Seva Kendra. (Photo by Rajib Jyoti Sarma/Hindustan Times via Getty Images)

Approximately 30 lakh of the 40.07 lakh individuals who were not included in the final draft of the National Register of Citizens (NRC) have submitted applications for inclusion in the register within the time window provided for claims and objections, which closed on Monday (31 December 2018), reports The Hindu.

The NRC is meant to be a list of all genuine Indian citizens who are residents in Assam. Those who were excluded from its final draft were given between 25 September and 15 December initially to reapply for inclusion, but the deadline was extended to 31 December by the Supreme Court due to the delays caused by panchayat elections in the state.

During the claims and objections phase, around 600 objections were filed by those individuals expressing doubt over the inclusion of certain people as citizens in the draft.

The number of applications had picked up pace during the last couple of days since a clause which made documents obtained after 31 August 2015 inadmissible for claims was done away with.

Guwahati-based activist A B Khandakar stated that, “While this came as a relief for many, others hit the hurdle of not being allowed to use a fresh legacy. This meant applicants could not change the person from whom they had drawn their ancestry in the original application that was rejected at the time of the complete draft.”

Some cases have come to light where uneducated applicants have mistakenly used a person as legacy, who is in reality genealogically linked to someone else, not them, due to that person having the same name as their forbear.

The whole exercise is to be concluded by June 2019 after all claims and objections have been processed.