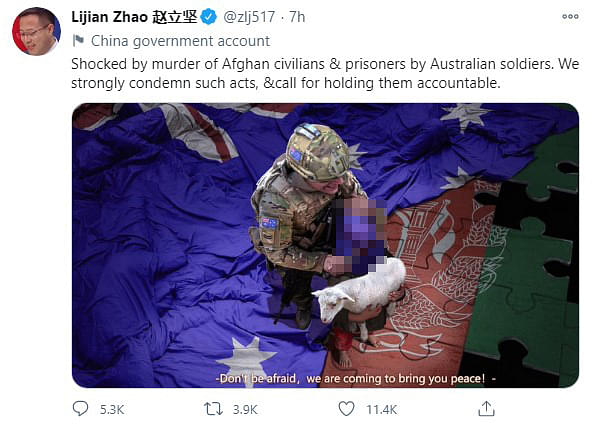 Australia has demanded China apologise for posting a fake picture on a government Twitter account that depicted an Australian soldier murdering an Afghan child.

Zhao Lijian, a spokesperson for China’s foreign ministry, posted the graphic image showing a smiling soldier holding a bloodied knife to the throat of a veiled child, who is holding a lamb. The image also showed a large Australian flag behind the soldier covering what appears to be a number of body shapes.

On Monday, Zhao tweeted alongside the digitally altered image: ‘Shocked by murder of Afghan civilians & prisoners by Australian soldiers. We strongly condemn such acts, & call for holding them accountable.’

"The Chinese government should be totally ashamed of this post. It diminishes them in the world's eyes," PM Morrison said. "It is a false image and terrible slur on our defence forces."

“ There are undoubtably tensions that exist between China and Australia, but this is not how you deal with them.” he added.

Morrison also said that other nations were watching how China was treating Australia’s efforts to protect its sovereignty and stand up for its values.

China’s foreign ministry however rejected calls for apology from the Australian prime minister to apologise over fake picture insisting it is Australia that should be saying sorry for the loss of life in Afghanistan.

The relations between Australia and China has rapidly deteriorated this year after Morrison’s government called for an independent inquiry into how coronavirus began, China has retaliated by imposed tariffs on Australian products.