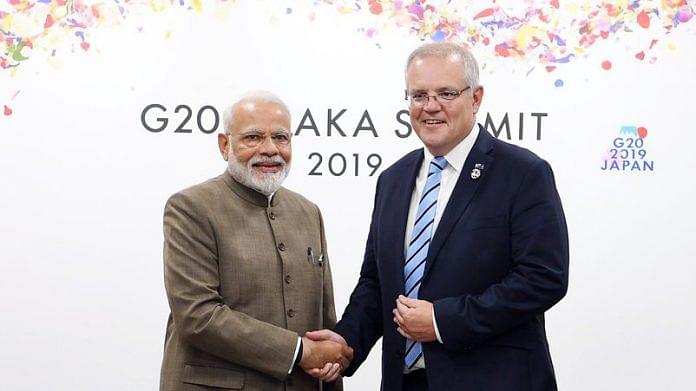 With massive bushfires vitiating in Australia, the nation's Prime Minister (PM) Scott Morrison's visit to India later this month has been called off, reports Livemint.

The decision to call off the visit scheduled to be held from 13-16 January was announced after PM Morrison and his counterpart PM Narendra Modi held a telephonic conversation on Friday (3 January).

During the conversation between two world leaders, PM Modi extended his heart-felt condolences on the loss of life and property caused by the unbridled fire in Australia.

Meanwhile, it should be noted that the Government of Australia has declared a state of emergency and forced evacuation of scores of citizens and tourists in a bid to avoid any further losses from the fires which have already taken the lives of 20 individuals.

Morrison has called an emergency meeting of the National Security Committee (NSC) on Saturday to discuss escalating the military response to bushfires, which were expected to be exacerbated by catastrophic weather conditions.

"The role of the Australian Defence Force (ADF) will become greater and greater in the days ahead, particularly when the things they do, the airlifting, the evacuations, the engineering support, the ­accommodation, the evacuation centres," Morrison told the media here on Friday.

"All of this (will) become more and more required as these fires get larger and larger."

When asked if he has requested additional firefighting support from overseas, Morrison said "of course".

Temperatures across Victoria and New South Wales (NSW), the two states that have been hardest-hit by the fires in recent days, were expected to exceed 40 degrees Celsius on Saturday.

A large number of firefighters and volunteers are full-heartedly working to arrest the fire from exacerbating which has primarily affected the Australian States of Victoria and New South Wales.