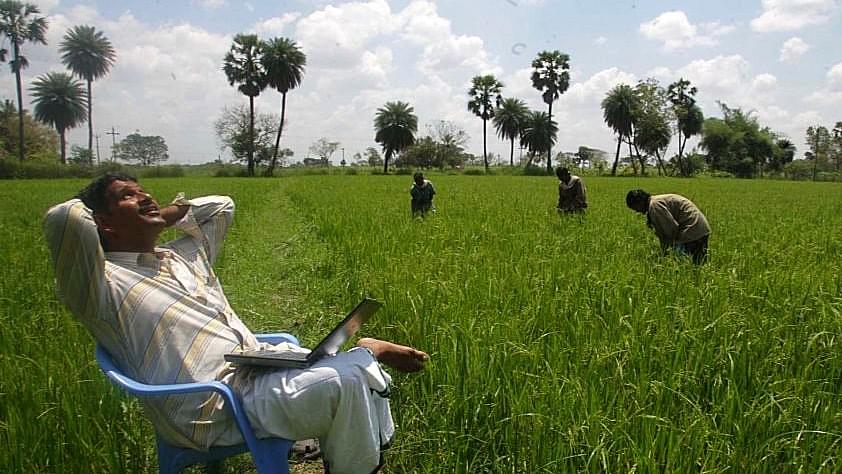 An agriculturist sits with his laptop in Kadiramangalam, a small village in the Kaveri Delta. (Satish Bate/Hindustan Times via GettyImages)

In a testament to the success of government’s ambitious BharatNet program, the data usage through government installed Wi-Fi hotspots in villages has tripled in the last six months, Financial Express has reported.

As of April 30, according to the report, “190 per cent increase in data consumption has been recorded during the last six months in rural areas where broadband internet is provided through Wi-Fi hotspots running on BharatNet Infrastructure.”

As part of the program, the government aims to connect all 250,050 gram panchayats (GPs) in the country with high speed broadband, with last mile internet connectivity to be ensured through Wi-Fi hotspots.

Till now, the government has connected over 1 lakh GPs to the hotspots with the remaining to be connected by the year end. Of these, 7,183 GPs across 12 states have working Wi-Fi hotspots installed under the program.

Under the program, users are provided 12 GB of data for Rs 100 with 28 days validity. Smaller packs of 500 MB, 2GB and 4.5 GB for Rs 10, Rs 25 and Rs 50 respectively, with validity of 10-28 days, are also available. Under the program, the data is provided by state owned PSUs like BSNL and private players like Airtel, Reliance Jio and others too.

Karnataka leads in the implementation of the hotspot service, called Wi-Fi Choupal, followed by Uttar Pradesh and Madhya Pradesh.

“The benefit of Wi-Fi choupals is that if a person has registered in to one of the hotspots, say Bihar, then he can use the service or the plan across any of the Wi-Fi choupals in the country,” a DoT official said.

The BharatNet project has entered its second phase of implementation, to conclude in March 2019, with all GPs in the country to be connected to the internet by then.