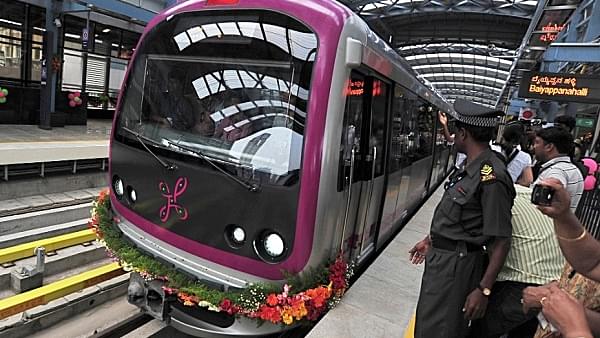 The loco-pilot detected the wires were missing at the controls of a train moving between Baippanahalli and Swami Vivekananda stations. (Photo by Jagdeesh MV/Hindustan Times via Getty Images)

The Namma Metro Rail operations on the Purple Line between Baiyappanahalli and Nayandahalli could have been jeopardised any time between 15 May and 5 June over lack of security.

1.225 tonne of copper wires worth Rs 5 lakh were stolen, the Rail Analysis India reports. The wires were installed for earthing on the third rail which electrically powers the Metro rail.

Earthing are used to protect both the system and human life, because it paves an alternative path for dangerous current to flow, and hence avoid accidents and equipment damage due to electric shock.

Along with the cooper, a total of 490 meters in length was missing. This could have led to the complete electrical system failure and leading to halting the metro services in the city until they would have been repaired.

The robbery was detected on 5 June by a loco-pilot and not by the track maintenance workers who had to keep daily checks on the tracks. The loco-pilot detected the wires were missing at the controls of a train moving between Baippanahalli and Swami Vivekananda stations.