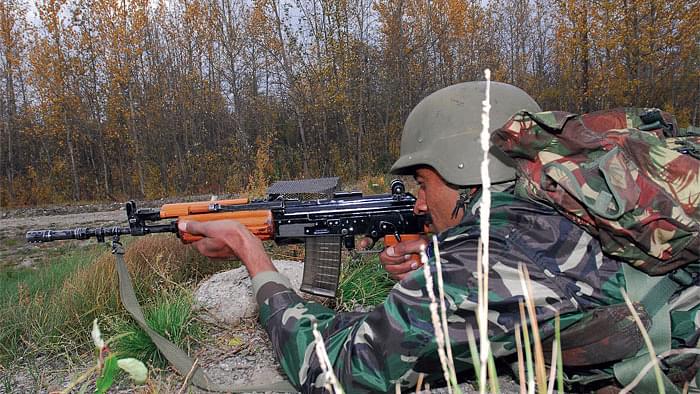 An Indian soldier with the INSAS rifle, during a military exercise. (Pvt. Howard Ketter/Wikipedia). The US-manufactured rifles will replace the INSAS rifles

In a major boost to infantry modernisation, the Defence Ministry has cleared a long-pending proposal of the Indian Army to procure around 73,000 assault rifles from the US under fast track mode, Livefistdefence has reported. This will be Indian Army’s largest infusion of basic assault rifles in recent years.

Defence Minister Nirmala Sitharaman has approved procurement of the 72,400 SIG716 assault rifles which will be used by troops deployed along the nearly 3,600-km long border with China.

According to the Livefist defence, the order for 72,400 assault rifles from Sig Sauer Inc. will be the single largest contract for assault rifles since the INSAS, developed and built by the state-owned Ordnance Factor Board (OFB), entered service.

The US-manufactured rifles will replace the INSAS rifles. The world's second largest standing Army as been pressing for fast-tracking the procurement of various weapons systems considering the evolving security threats including along India's border with Pakistan and China.

Around 18 months ago, the Army had rejected an assault rifle built by the state-run Rifle Factory, Ishapore, after the guns miserably failed the firing tests.

The procurement of assault rifles has witnessed significant delays due to a variety of reasons including the Army's failure to finalise the specifications for it. The Army needs around 7 lakh 7.62x51 mm assault guns to replace its INSAS rifles.

The Indian Army has, over the last decade, procured a few thousand Israeli Tavor TAR-21 5.56mm assault rifles for its Special Forces and Rashtriya Rifles counter-insurgency units, but has continuously failed to land a large-scale induction of desperately needed assault rifles.