BJP Informs The Governor That It Won’t Form Government In Maharashtra; Wishes Shiv Sena ‘The Best’ 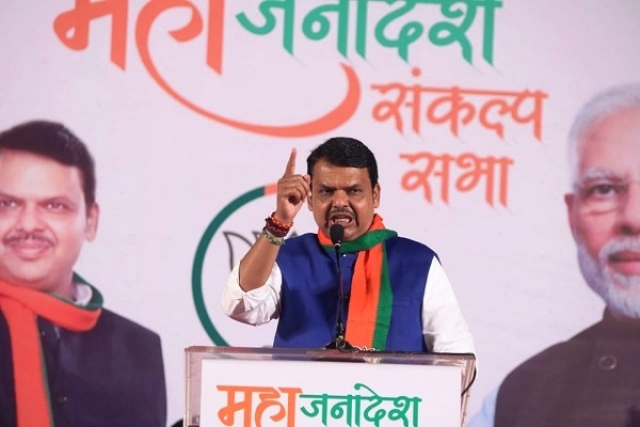 In a stunning political development, the Bharatiya Janata Party on Sunday (10 November) conceded its inability to form the government in Maharashtra despite having the public mandate for its pre-poll alliance.

BJP State President Chandrakant Patil said that party's stand has been conveyed to Governor B S Koshyari this evening after a series of marathon meetings of the party's state core committee since morning.

"The Shiv Sena has insulted the public mandate... If it is in a position to form the government along with the support of the Congress-Nationalist Congress Party, our best wishes are with them," said Patil, who was flanked by his former minister colleagues like Ashish Shelar, Sudhir Mungantiwar, Vinod Tawde, Pankaja Munde and Girish Mahajan, at the brief media interaction on the lawns of Raj Bhavan.

Outgoing Chief Minister Devendra Fadnavis - who has confidently proclaimed till Saturday (9 November) that the BJP would form the government - was conspicuous by his absence.

Reacting to the development, NCP's national spokesperson Nawab Malik said that there is no formal proposal from the Sena on the government formation.

"However, our national President will clear the party's stand at our party legislators' meeting scheduled in Mumbai on Tuesday," Malik told media persons.

The opposition Congress also conducted informal discussions with its legislators, currently flown to Jaipur, to gauge their mood on supporting the Sena, though the party high command has already expressed its reluctance in the matter.

There were contradictory opinions in Mumbai - while former city President Sanjay Nirupam reiterated that the Congress should keep off the Sena at all costs, another former city chief Milind M. Deora suggested exploring a Congress-NCP government with Sena support.

Political activity gathered speed after Governor Koshyari took the reins in his hands and late on Saturday invited the BJP - the single-largest party with 105 MLAs - to indicate its willingness to form the next government, barely four hours before the tenure of the state Assembly expired at midnight.

Besides the 105 members, the BJP had claimed the support of several independents and smaller parties, though the exact figures are not clear, and whether these would be sufficient to achieve the simple majority of 145 in the 288-member assembly.

Experts have said that in case the BJP is not able to muster sufficient numbers, then the Governor would invite the second largest party - the Shiv Sena, followed by the remaining two parties, the Nationalist Congress Party and Congress to explore the possibility of forming the next government.

Earlier on Sunday, Sena President Uddhav Thackeray met his legislators - all secured in The Retreat - a five-star hotel in Madh, Malad (north-west Mumbai) and boosted their morale by assuring that a Shiv Sena CM would soon be sworn-in.