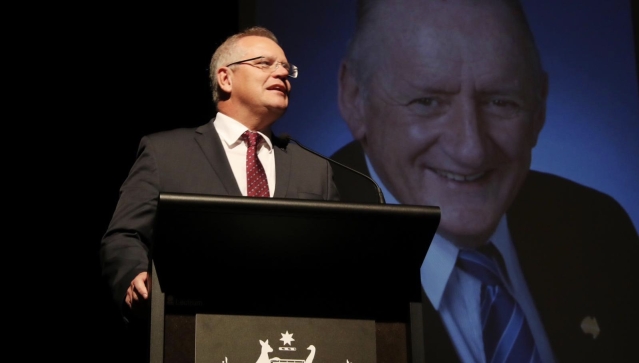 Australian Prime Minister Scott Morrison on Thursday (11 June) said that the recent Black Lives Matter protests in the country has been hijacked by "left-wing agendas".

Morrison rejected calls to tear down statues of historical figures including Captain James Cook, who claimed Australia for the British Empire in 1770, amid the removal of statues of contentious figures in the US and UK, reports Xinhua news agency.

Morrison defended the reputation of Captain James Cook after calls by Black Lives Matter activists to remove statues of the explorer who discovered Australia. He said that Captain Cook was an "enlightened" man for his time and demands to remove his statue go too far.

"In his time, he was one of the most enlightened people," Mr Morrison said, reports 9News.

"I think what we're seeking with some of these protests, they start on a fair point when they're raising issues about, you know, people's treatment in custody or things like that," Morrison, who represents the electorate named after Cook, told Nine Entertainment radio.

"But now it's being taken over by other much more politically driven left-wing agendas, which are seeking to take advantage of these opportunities to push their political causes.

"I've always said we've got to be honest about our history. We've got to acknowledge the positive and the negative.

"I think we've also got to respect our history as well. And this is not a licence for people to just go nuts on this stuff," he said.

The Prime Minister confirmed that the protests earlier in June that were attended by tens of thousands of Australians have delayed the easing of coronavirus restrictions by a week.

Health authorities are waiting to analyze if the mass gatherings cause a spike in cases before proceeding with lifting restrictions.

"The rally last weekend is the only legitimate real block to this at the moment, because we actually don't know right now whether those rallies on the weekend may have caused outbreaks," he said.

"People who rallied this (past) weekend showed great disrespect for their neighbours."

Morrison comments came hours before authorities in Australia's Victoria state announced one person who attended a rally in Melbourne had tested positive for Covid-19.