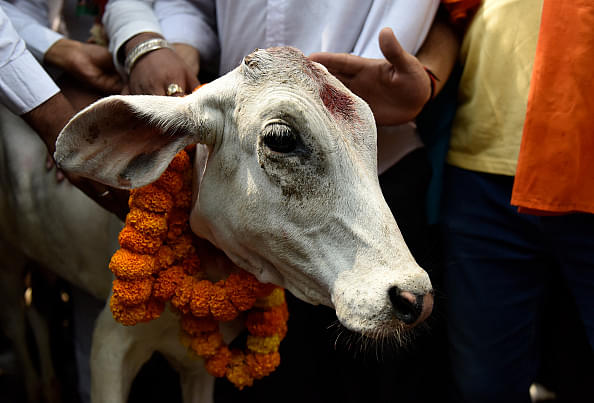 BJP activists perform a ‘puja’ of a calf in New Delhi. (Photo by Mohd Zakir/Hindustan Times via Getty Images)

The Himachal Pradesh Legislative Assembly passed a resolution on Thursday (13 December) declaring the cow as ‘Rashtra Mata’ (National mother). This follows Uttarakhand, which had become the first state in the country to pass such a resolution, reports TOI.

Anirudh Singh, a Congress MLA, tabled the resolution and was supported by BJP lawmakers. He said, “Cow is not bound to any caste, creed or religion and makes a huge contribution to humanity.”

He reasoned that the need for such a resolution had arisen as people would abandon cows when they were no longer able to provide milk. He also took a stance against cow vigilantism and called for a law to prevent mob lynchings stemming from the same.

Animal Husbandry Minister Virender Kanwar discussed how the Himachal government under Jai Ram Thakur was already working to create cow sanctuaries in various districts of the state at the expense of crores of rupees.

Lawmakers also asked the state government to promote ‘Gauri’, a local cow breed from Himachal. The Himachal government has requested the National Bureau of Animal Genetic Resources at Karnal to give its approval to the name.

The MLAs also demanded that a separate cow ministry be set up, along the lines of Rajasthan, which created the first such ministry in 2015. BJP lawmaker Kishori Lal revealed that the state government was already spending around Rs 25 crore on cow welfare, collected from temple donations and cow cess.