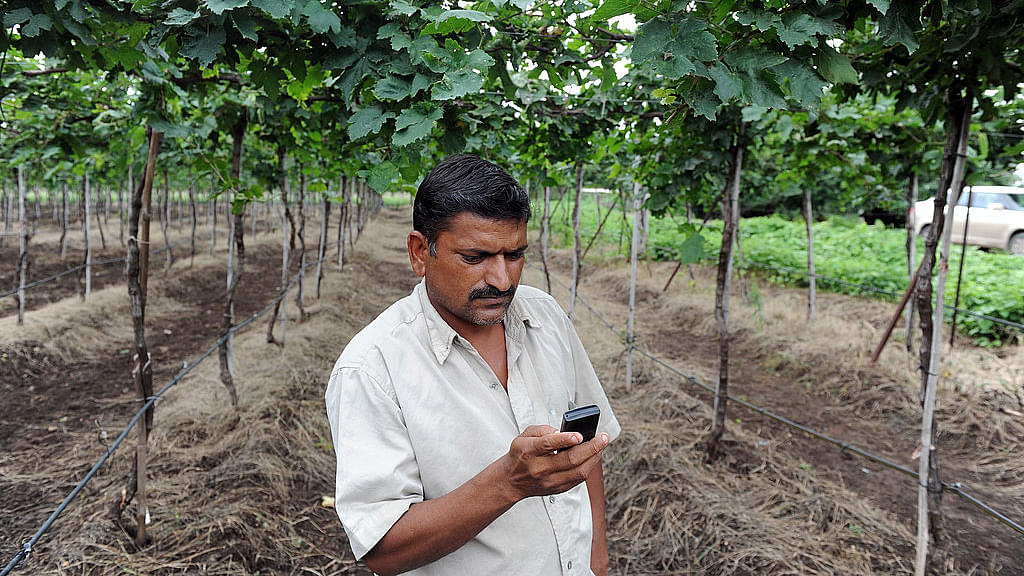 Indian grape and tomato farmer Sanjay Sathe placing a call to a dedicated agri-call centre to check out the weather forecast, on his vineyard in the village of Naitale in Nashik District. Photo credit: INDRANIL MUKHERJEE/AFP/GettyImages

With over 65 per cent of Indians residing in the countryside, the Finance Minister has said that ‘Gaon, Garib, Kisan are at the centre of all our efforts’.

Speaking of the success of rural electrification and the Ujjwala Yojana, by 2022, every single rural family except those who are unwilling to take the connection, will have an electricity and a clean cooking facility.

Speaking of the PM Grammen Sadak Yojana, the FM informed that 97 per cent of all eligible and feasible habitations have been provided road connectivity under the scheme. Phase 3 of the scheme has now been envisaged to upgrade 1.25 lakh km of road length at an estimated cost of Rs 80,250 crore.

Zero Budget Natural Farming, which has been widely adopted in Andhra Pradesh and Karnataka, will also be under the government’s focus in the coming years.

The FM also announced the strengthening of Farmer Produce Organisations (FPOs) and the digital National Agriculture Market (e-NAM) to ensure that farmers can get the best value for their produce.

Role of fisheries has also been recognised as a crucial component of the rural economy. The Pradhan Mantri Matsya Sambada Yojana will address critical gaps in value chain for the industry.

Speaking of the Pradhan Mantri Awas Yojana - Grameen, the second phase is set to be launched providing 1.95 crore houses to be provided to eligible beneficiaries, during 2019-20 to 2021-22.

The newly instituted Jal Shakti ministry will work with the states to ensure ‘Har Ghar Jal’ for all rural houses by 2024 under the Jal Jeevan Yojana.

The FM has also stressed on the importance of digital literacy in rural areas, speaking of the the BharatNet scheme which will connect all the Gram Panchayats in the country with high speed broadband network.