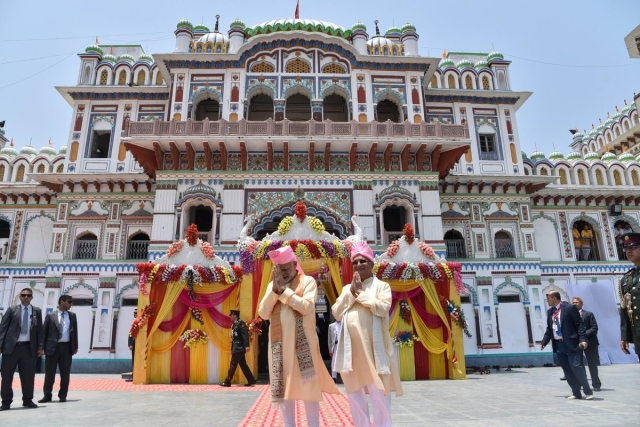 Prime Minister Narendra Modi along with his Nepali counterpart K P Sharma Oli today (11 May) launched direct bus services between Ayodhya in India and Janakpur in Nepal. The bus service assumes significane because it connects Shri Rama's birthplace (tradition holds that he was born in Ayodhya) with Sita's birthplace (Janakpur). The inauguration was done after PM Modi visited the famous twentieth century temple built for Sita (the Janaki temple, named after the place of her birth). The trip was part of PM Modi's Nepal visit itinerary - a trip many see as important in the process of setting India-Nepal relations on the right track.

The bus service is part of the Indian government's attempt to develop tourist circuits around famous place of pilgrimage and centres of religious importance. The Ramayana circuit, according to this report, include over 15 cities such as Ayodhya, Nandigram, Shringverpur and Chitrakoot (Uttar Pradesh), Sitamarhi, Buxar and Darbhanga (Bihar), Chitrakoot (Madhya Pradesh), Mahendragiri (Odisha), Jagdalpur (Chattisgarh), Nashik and Nagpur (Maharashtra), Bhadrachalam (Telangana), Hampi (Karnataka) and Rameshwaram (Tamil Nadu).

Modi's visit comes at an important time: KP Oli’s is the first stable government in Nepal after 60 long years – the last was B P Koirala-led Nepali Congress government that won the elections decisively in 1959. Since then, Nepal has seen 40 governments in 60 years. India-Nepal relations hit a new low during the September 2015 to February 2016 blockade that had been imposed by protesters in Madeshi regions. While India may not have had an active role in encouraging the blockade the impression that it had engineered the crisis was created due to India's demands for concessions to the protesting Madheshis, the traditional inhabitants of Terai region of Nepal.

Though the blockade ended in February 2016, Oli had become a vocal critic of India by then and had firmly moved into China’s orbit. Later that year, when the fragile coalition between him and communist leader Prachanda collapsed due to Oli not honouring a power-sharing deal with Prachanda, leading to Oli being voted out of office, Oli blamed India for toppling his government.

India has already reached out very positively to Oli and the latter has reciprocated very warmly. Immediately after the elections, Prime Minister Narendra Modi called Oli and invited him to visit India. Modi called him again in January and a series of high-level contacts between the two countries put relations with Oli on an even keel. External Affairs Minister Sushma Swaraj made a very successful visit to Kathmandu in early February. Oli also wrote to Modi on the eve of India’s Republic Day celebrations this year seeking closer ties with India. Modi's visit must be viewed in context of all these developments.