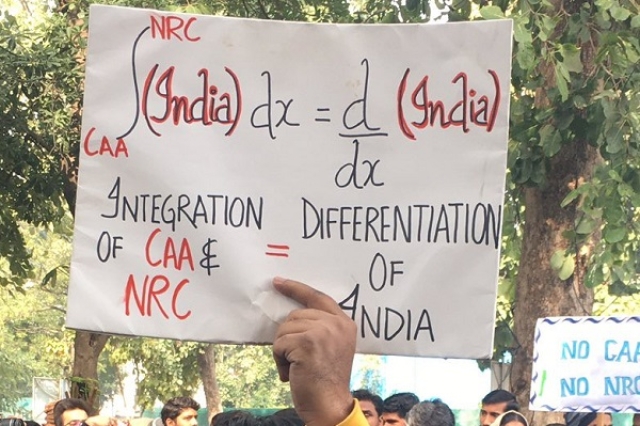 Amid rallies happening across the country both in support and against Citizenship Amendment Act, one particular placard has caught the attention of Twitterati.

The protester was a part of anti-CAA rally and held a placard containing a mathematical equation which equated the integration of India with limits from CAA to NRC with differentiation of India.

Various social media users tweeted how the equation violates the laws of mathematics, while many others had quirky remarks for the goof up.

Just for fun, I decided to show this NRC-CAA mathematical equation to a (highly acclaimed) mathematician.
Check out the reply! ð pic.twitter.com/XcIUA5LFf6

One user remarked, “They say, CAA and NRC all same, in that case, the integration becomes zero. Ultimately it turns out that India is constant.”

Another remarked, “ That's what happen when you don't attend lectures and do dumb protests everyday.”

It may be recalled that while this placard in question is relatively harmless, the anti-CAA and JNU protests have seen the use of posters which outright denigrate India and Hinduism. Some of the posters had morphed Om into a Nazi symbol, turned goddess Kali into a hijab clad woman and demanded “free Kashmir”.