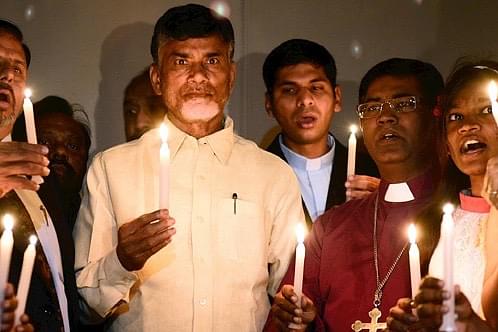 Naidu asked the Christian community to stand with TDP in the upcoming elections. He announced R.50,000 for poor Christian girl’s marriage.

Having participated in Christmas celebrations organised by the state, he stated that Christian missionaries provide exceptional service for education and health. He quoted Mother Teresa for her selfless dedication to society.

He said his government spent Rs.250 crores for Christians in four years and will continue to support converted Christians and keep fighting for them till they are provided with SC status.

Naidu said, “For Christian Bhavan, we gave two acres land and Rs 10 crores. Now, we are allotting additional six crores as per your appeals. We will provide full economic support for the construction of churches even without contribution. We will give 24 December as an optional holiday. We will spend Rs 100 crores to develop burial grounds for Christians.”

Naidu concluded that TDP government respected all religions and provided many welfare programs despite Centre’s non-cooperation.