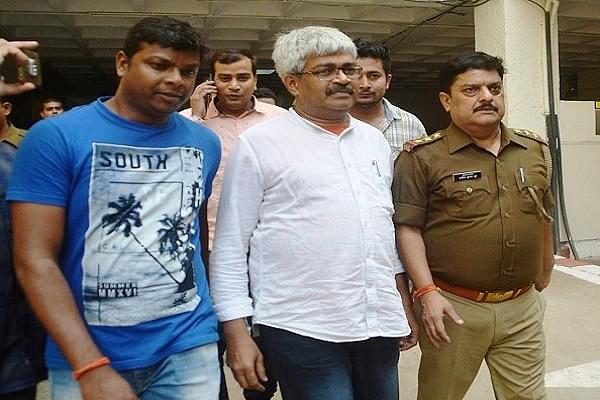 Vinod Verma after being picked up by police in Ghaziabad. (Sakib Ali/Hindustan Times via Getty Images)

Former BBC journalist Vinod Verma, who was the subject of controversy last year (2017) for his involvement in a ‘Sex CD’ scandal, and well-known Hindi journalist Ruchir Garg, are among the four advisers appointed by the General Administration Department (GAD) to new Chhattisgarh Chief Minister Bhupesh Baghel, reports The New Indian Express.

In October 2017, Verma had been arrested by Raipur police from Ghaziabad after Bharatiya Janata Party (BJP) leader Prakash Bajaj complained of being blackmailed by an unidentified caller who claimed to have a scandalous CD of his ‘aaka’ (master).

In the police raid on Verma’s residence, over 500 CDs and pen drives were recovered. After the police action against him, a sex CD, purportedly showing a recording of then PWD Minister Rajesh Munat, emerged in Raipur.

Munat claimed innocence and alleged that the recording was forged. He filed a complaint against Baghel for trying to tarnish his reputation.

Verma ended up spending sixty days in police custody in the matter, after which he was released. The case was later assigned to the Central Bureau of Investigation, which is currently investigating Verma, Baghel, among others, as accused. One of the other accused Rinku Khanuja has already committed suicide.

Baghel also spent a few days in judicial custody in the case, after which he was released on bail.

The accused were all chargesheeted under IPC sections 469 (forgery to harm reputation), 471 (using a forgery as a genuine document), 120B (criminal conspiracy) and 67A (transmitting or publishing sexually explicit material) of the Information Technology Act.