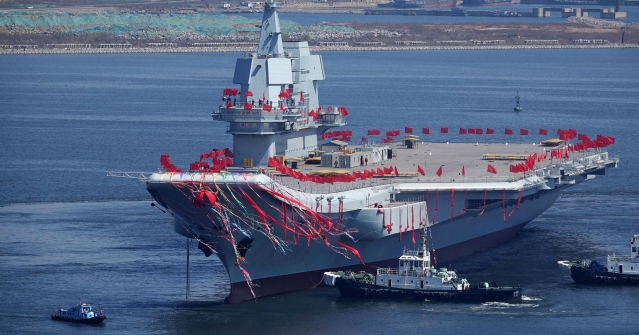 Type 001A, China’s second aircraft carrier, is seen during a launch ceremony.

China began sea trials on Sunday of its first domestically built aircraft carrier, which is likely to be delivered to the People’s Liberation Army Navy ahead of schedule.

The aircraft carrier was launched in 2017, months after China commissioned its first carrier called Liaoning - a former Kuznetsov-class Soviet hull that was built in Ukraine and later purchased and refitted by the Chinese Navy.

The country’s second aircraft carrier, currently called Type 001A, is a 55,000 tonnes vessel and use conventional rather than nuclear propulsion.

While the carrier is expected to be delivered to the Chinese Navy later this year, it will not be ready for combat before 2020.

"The Type 001A is a major milestone for the PLAN," researchers at Washington-based Center for Strategic and International Studies have said, adding that “China is working toward incrementally matching some of the best carrier technology in the world, and the Type 001A is a big step in ... that direction."

However, experts say, China lacks the experience to efficiently operate such vessels. Countries like the United States, Russia, France, the United Kingdom and India, who have been operating carriers for decades, have more experience.