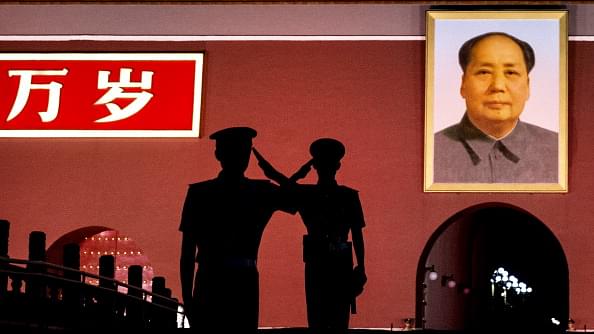 A student who heads the Marxist society of the prestigious Peking University in Beijing has been arrested by the Chinese police for trying to commemorate the 125th birth anniversary of the founding father of Communist China Mao Zedong, reports The New Indian Express.

Qiu Zhanwuan, a known face of Marxist student activities at the university, was picked up by seven to eight plain-clothes policemen and shoved into a black vehicle near a subway station close to the university.

According to an eyewitness, Qiu strongly attempted to resist arrest, screaming, "I am Qiu Zhanxuan... I did not break the law. Why are you taking me away? What are you doing?"

Peking University is considered to be the top academic institution in China, but its students have often played a major role in protests and pro-democracy movements.

The university’s alumni are known to have been a significant force behind the anti-government protests at Tiananmen Square calling for democratic reforms in 1989.

This latest development follows a government crackdown on student activists at several Chinese universities in August this year, when police detained many individuals for their support of labour rights organisations, such as the Jasic Workers Solidarity group, which attempted to create a workers’ union at welding machine manufacturer Jasic Technology.

Another student activist from Peking University faced a clampdown from the faculty for drafting a petition demanding transparency in a sexual abuse case at the varsity.

"The faculty has always prevented activities by the Marxist society... It's difficult to spread information, posts on online campus bulletin boards would be deleted and WeChat (messaging) accounts would be blocked... Information about the arrest was strictly blocked by the school,” stated another student member of the Marxist society.

The Communist Party in recent years has made an attempt to downplay Mao’s importance. No official arrangements were made this year to mark his 125th birth anniversary.