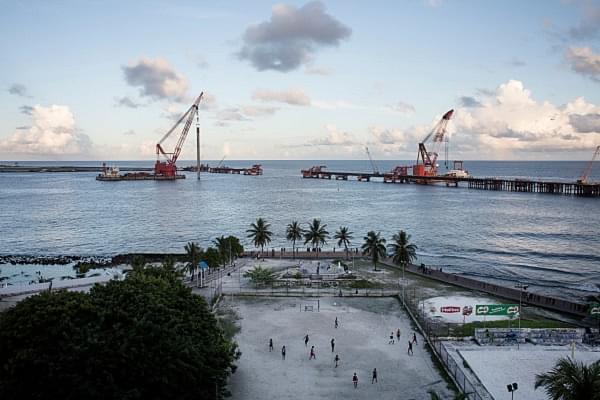 On a visit to New Delhi, Maldives Finance Minister Ibrahim Ameer revealed that China is executing infrastructure projects in his country at vastly higher prices than originally agreed, Times of India has reported. Further, he added that Maldives could not pull out of its commitments.

Maldives’ new government led by President Mohamed Solih is reviewing contracts awarded during the administration of former president Abdulla Yameen. The majority of those contracts were entered into with Chinese firms, and have left the country in debt.

As part of a five-year building spree, China constructed a sea-bridge connecting the capital city of Malé with the main airport located on another island. It is now redeveloping the airport and building mass housing units on land reclaimed from the sea.

Speaking to reporters in New Delhi, Ameer stated, "We believe that most of these projects are at inflated prices, and so we are looking at them." He added that there was not much renegotiation the government could do now, as many projects were already completed, but that it would try to bring down the costs as much as possible.

A prime example of the excess costs was a hospital project in Malé that was awarded to China, already running up a cost of USD $140 million, even though a rival offer had initially been made at USD $54 million.

China’s Belt and Road Initiative (BRI) projects have faced criticism for driving recipient countries that were meant to into a debt trap, an allegation the Chinese government has vehemently denied. Prime Minister Narendra Modi during his visit to Malé had promised India’s help to the Maldives in overcoming its financial troubles.