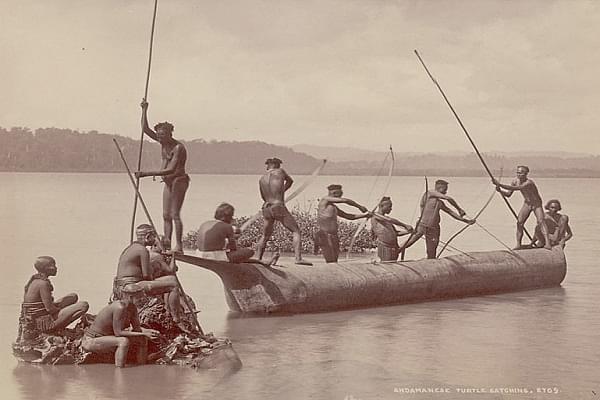 Andaman tribals hunting turtles in the 19th century. (Bourne and Shepherd for the Smithsonian Institution via Wikipedia)

International Christian Concern, a fundamentalist Christian organisation based in the US, has called for Sentilese tribals who killed American missionary, John Allen Chau, to be prosecuted for murder charges, reports TOI.

Chau had trespassed on the Andaman island of North Sentinel island in what turned out to be a failed bid to convert the indigenous people.

"Our thoughts and prayers go out to both John’s family and friends. A full investigation must be launched in this this murder and those responsible must be brought to justice," the organisation said in a statement to social media website, LAD Bible, which itself asserted that it is illegal to go to North Sentinel island, and that the Sentinelese are susceptible to diseases contracted from outsiders, so they must be left alone.

Its reports have met with mockery and derision by social media users, some calling for the group’s leaders to personally serve summons on the Sentinelese on their island. Surprisingly, the statement on LAD Bible website itself notes that it is illegal to go to North Sentinel island, Sentinelese are known to be violent to outsiders and the fact that they are susceptible to diseases contracted from outsiders, so they must be left alone. The organisation itself did not support Chau’s mission.

Previously, International Christian Concern has also criticised the treatment of Christians in Jharkhand.

Reecntly, Chau’s family had issued a statement saying they ‘forgive’ the Sentinelese tribe. They also asked Indian authorities to release the fishermen who was paid by Chau to assist him in his illegal journey to North Sentinel Island.

Others in the US have denounced the slain missionary’s recklessness in trying to contact a 30,000-year-old isolated tribe, which even the Indian government and Anthropologists try not to disturb.

Conservation groups expressed disappointment with Chau’s actions which could have further endangered the pristine tribe, with one commentator noting, "What better day than Thanksgiving to threaten the lives of indigenous people. This is how genocides start."