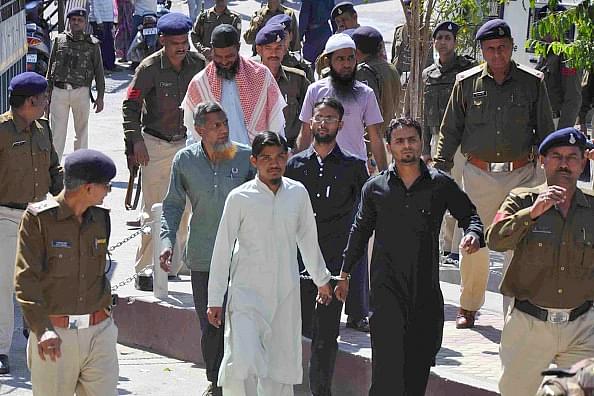 The SIMI men in police custody before they escaped. (Praveen Bajpai/Hindustan Times via Getty Images)

Madhya Pradesh (MP) police cops who were involved in the encounter of Students Islamic Movement of India (SIMI) men fleeing the Bhopal Central Jail have been cleared of any wrong doing by the judicial inquiry committee setup to probe the matter.

“The deceased persons were asked to surrender but instead of complying, they started firing at the police and public. So, it became necessary for the police to open fire. Even after the police opened fire they showed no intention to surrender and, as a result, sustained injuries and died on the spot.

The use of force resulting in the death of the escaped persons was quite inevitable and quite reasonable,” the report says.

The eight SIMI men were under trial and were being held in the prison in Bhopal. On the intervening night of 30-31 October, 2016 they tried to escape after slitting a security guard’s throat. The police team pursuing them caught upto the men at a village on the outskirts of the the state capital, where the encounter took place.

The Opposition Congress had levelled charges that the encounter was fake, and the state’s Chief Minister Shivraj Singh Chouhan had setup a judicial probe following the allegations. The probe has now given a clean chit to the police team.