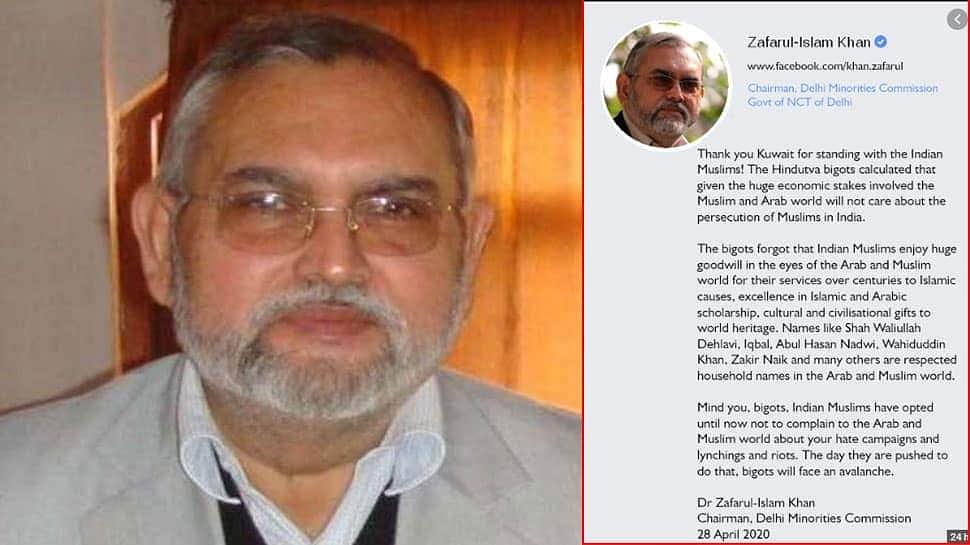 A single judge bench of the court presided by Justice Manoj Kumar Ohri granted anticipatory bail to Khan while directing him to furnish a personal bond of Rs 50,000 and a surety of like amount in the event he is arrested by the police.

Khan has been booked by Delhi Police on the charges of sedition over a statement on social media. Islam had on 28 April posted controversial comments on his Facebook page.

"Mind you, bigots, Indian Muslims have opted until now not to complain to the Arab and Muslim world about your hate campaigns and lynchings and riots. The day they are pushed to do that, bigots will face an avalanche," Khan had written on Facebook.

Speaking to IANS, advocate Vrinda Grover while reacting to the verdict said, "Dr Zafarul-Islam Khan, former Chairman of Delhi Minorities Commission, has been granted anticipatory bail today by the Delhi High Court in a petition filed by advocates Vrinda Grover, Soutik Banerjee and Ratna Appnender, in the FIR registered against him for his social media posts."

"Justice Manoj Kumar Ohri noted the submissions of Ms Vrinda Grover that Dr Khan has participated in the investigation, and has answered all questions. Accordingly, anticipatory bail was granted and the petition was allowed," she added.

Delhi Police Special Cell registered the FIR on the complaint of a Vasant Kunj resident. According to the FIR, the copy of which is with IANS, Khan has been booked under several sections of the Indian Penal Code -- 124 A (sedition) and 153 A (Promoting enmity between different groups on grounds of religion, race, place of birth, residence, language, etc).

The Cyber Cell of the Delhi Police on 6 May conducted raids on Khan, the ex-chariman of the Delhi Minorities Commission in connection with a case registered against him over his alleged seditious remarks on social media.

"The team was looking for the mobile handset used by him to post content on social media platforms," sources in the enforcement agency said.