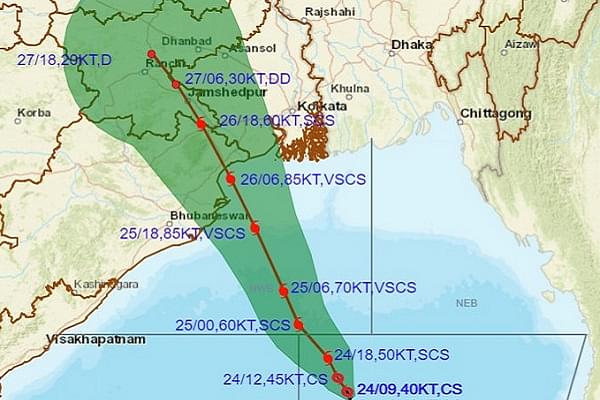 Severe cyclonic storm 'Yaas' has moved north-northwestwards with a speed of about 10 kmph over the past six hours and lay centred on early Tuesday over east central and adjoining west central Bay of Bengal.

It is very likely to move north-northwestwards and intensify further into a very severe cyclonic storm during next 12 hours, the advisory forecast.

The cyclone is expected to continue to move north-northwestwards, intensify further and reach northwest Bay of Bengal near North Odisha and West Bengal coasts very close to Chandbali-Dhamra Port by May 26 early morning.

"Yaas is very likely to cross North Odisha-West Bengal coasts between Paradip and Sagar Islands around Balasore during May 26 noon as a very severe cyclonic storm."

The maximum sustained wind speed of the cyclone is estimated 55 knots gusting to 65 knots around system centre. Sea condition is rough to very rough and the estimated central pressure is 982 HPA (Hectopascal Pressure Unit).

"As per satellite imagery based on 0000 UTC of May 25, the clouds are organised in curved band pattern. Intensity of the system is characterised as T 3.5. Broken low and medium clouds with embedded intense to very intense convection lay over the area between latitude 12.5 degree north and 19.5 degree and 82 degree east and 90 degree east. Minimum cloud top temperature is 93 degree central," said the advisory.

"The Madden Julian Oscillation (MJO) index currently lies in Phase 5 with amplitude near 1. Thereafter, it will move across phases 6-8 with amplitude less than 1. MJO is conducive for enhancement of convection over the Bay of Bengal (BoB) on Tuesday," said the advisory.

The Tropical Cyclone Heat Potential (TCHP) is over major parts of Bay of Bengal, and it is slightly decreasing over extreme north and along and off Andhra, Odisha, West Bengal coasts.