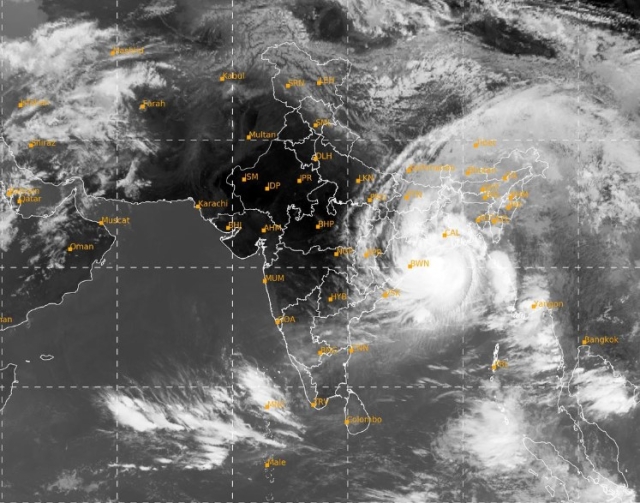 According to the Indian Meteorological Department (IMD), the severe cyclonic storm Amphan is likely to reach Kolkata by today evening, as it has already arrived at the coast of West Bengal, Hindustan Times reported.

At 3:05pm today, the wind speed at Kolkata airport was recorded at 76 km per hour, as per the IMD office.

According to National Disaster Response Force (NDRF) Director General S N Pradhan, over 5 lakh people were today evacuated from the coastal areas in the state before the landing of the severe cyclonic storm near Sunderbans in West Bengal. Close to 1.6 lakh people had been taken to safer locations in Odisha, he said.

“Based on experiences during Cyclone Fani, all NDRF teams are equipped with tree cutters/pole cutters for post landfall restoration, if need arises. We have deployed at least 20 teams in Odisha and 19 teams in West Bengal and 2 in stand-by have been pre-positioned in consultation with state authorities. These NDRF teams will shortly begin restoration work. All teams have wireless and satellite communications,” Pradhan said at a news briefing.

“Keeping in mind the prevailing Covid-19 pandemic, all NDRF teams have been equipped with PPE kits. We are not dependent on any communication system. It is another form of new normal, we have to handle disasters considering the Covid-19 pandemic too,” the NDRF chief added.

The cyclonic storm has caused heavy rain and high-speed gusty winds in the coastal regions of West Bengal and Odisha and will continue for a couple of hours.

“The forward sector of the wall cloud region has entered into land in West Bengal. The intensity of the cyclone near its centre as the landfall process began was recorded at 160-170 kmph, increasing to about 190 kmph,” the IMD data told.

At 3:05 pm, the wind speed at Kolkata airport was recorded at 76 km per hour, the meteorological office said.