Delhi: 9 Including 3 Children Die In Another Fire Tragedy At Kirari, Weeks After Anaj Mandi Accident Killing 43 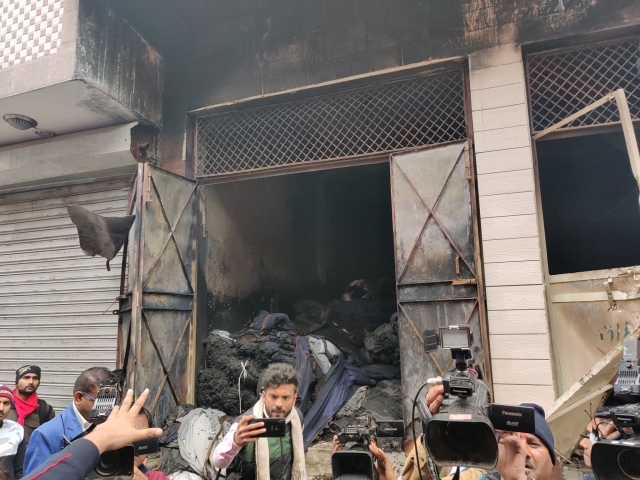 Three children were among nine people killed in a blaze that ripped through a three-storey building, the ground floor of which was being used as a clothes godown, in Outer Delhi's Kirari area on Monday (23 December), the Delhi Fire Services said.

Pooja (24), her three-year-old daughter Aaradhya, and niece Saumya, who is 10 years old, survived the fire by jumping to the adjacent building, a police official said.

The fire victims were identified as Ram Chandra Jha (65), Sudariya Devi (58), Sanju Jha (36), and Guddan who were at the second floor of the building where the supposed cylinder blast took place. Udaykant Chaudhary (33), his wife Muskan (26), and their three children Anjali (10), Adarsh (7) and three-month-old Tulsi, were on the first floor.

"I had gone to Haridwar for a holy bath in the river Ganga as my brother had died in January. I left the house around 5.30 pm on Sunday. Around 12.15 am, my wife Pooja called. But her voice was not clear. Later, my other relatives informed me about the incident," said Amarnath, younger son of Ram Chandra Jha.

The Delhi government on Monday announced Rs 10 lakh compensation to the next of kin of the Kirari fire victims.

Delhi Home Minister Satyendar Jain announced Rs 1 lakh compensation for the injured and that the government would bear the expenses of treatment of the injured.

"There was an underground godown. It is the responsibility of the municipalities to check such irregularities," Jain said after meeting the victims' families.

"Inspected Kirari fire where in a tragic incidence nine people died and three injured. Ordered magisterial enquiry to fix responsibility. The Delhi government to provide Rs 10 lakh compensation for deceased, Rs 1 lakh for those injured and their treatment," he tweeted later.

Inspected Kirari fire where in a tragic incidence 9 people died and 3 injured.
Ordered Magisterial enquiry to fix responsibility.
Delhi Govt. to provide Rs. 10 lakh compensation for deceased; Rs. 1 lakh for those injured and their treatment. pic.twitter.com/tOeNqWLqbI

Ram Chandra Jha had rented out the ground floor to Vijay Singh Katara, who claimed that clothes worth Rs 20 lakh was gutted.

In another incident on 8 December, at least 43 people, most of them reportedly children in the age group of 14 to 20, were killed and over a dozen others injured in the fire that broke out in the bag manufacturing unit due to short circuit.

An IANS study of similar cases of the past two years points to loss of over 80 lives in similar incidents at unauthorised establishments with narrow passages and no fire safety provisions.