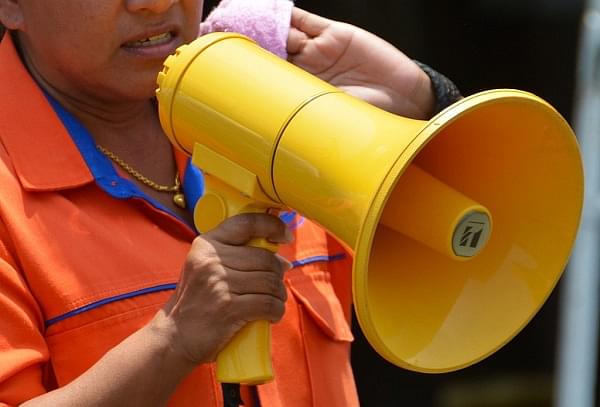 Representative image of a woman using a megaphone. (Pic via Picryl)

Keeping in mind concerns about worsening learning atmosphere due to loud public address systems used by student leaders, Delhi University has come out with an advisory asking for loudspeakers and other such systems to not be used ‘beyond permissible limits’ within university premises, reports India Today.

"Please note that the use of loudspeakers/public address system/beating of drums/sound amplifiers/sound-emitting fire crackers beyond permissible limits is not advisable as it disturbs the teaching and research environment of the varsity," reads the advisory.

The notice has also reiterated that a 100 metre radius around the university premises is a ‘silence zone’ in accordance with provisions of the Noise Pollution (Regulation and Control) Rules, 2000 and also in conformity with directions given by the Delhi High Court and the National Green Tribunal.

The decision comes in the wake of protests launched by the Delhi University Teachers’ Association (DUTA) and some student groups in recent months about a variety of issues. Loudspeakers, drums and other such loud equipment had been used in these protests.

DUTA stated that the advisory was an ‘empty threat’ and also expressed confidence that students and teachers would not be impacted by it.