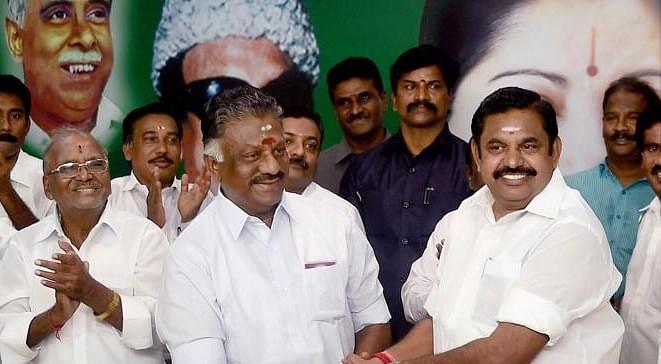 Tamil Nadu Chief Minister K Palaniswami today (23 November) said the Election Commission of India (ECI) has allotted the two leaves symbol to the unified All India Anna Dravida Munnetra Kazhagam (AIADMK) led by him and Deputy Chief Minister O Panneerselvam, popularly known as the EPS-OPS faction. Palaniswami described the development as a "welcome step" and the happiest day for the party. Party workers broke into celebration by bursting crackers and distributing sweets in front of the party headquarters here.

The development is a setback to the deposed party leader V K Sasikala, currently serving in the Parappana Agrahara Central Prison in Bengaluru in a disproportionate assets case, besides her nephew and sidelined deputy general secretary T T V Dhinakaran.

Palaniswami told reporters that their faction had provided all the necessary documents and affidavits to prove that it had the claim for it on its majority strength in various party fora. The issue has been lingering since April in the aftermath of the announcement of by-poll to R K Nagar Assembly constituency. However, the April 12 by-election was cancelled days ahead on allegations of use of money power and malpractices. The ECI had then frozen the AIADMK party name and its symbol after then factions had staked claim over it. Panneerselvam, who first revolted against Sasikala, later merged his faction with the one led by Palaniswami after the latter rebelled against her.

In its 83 page verdict , the ECI has pointed out that the OPS-EPS faction enjoys the support of 111 MLAs while the Dhinakaran led faction has the backing of a mere 20 MLAs. Out of the 34 Lok Sabha MPs, 31 are with the ruling faction. Out of the 2,128 AIADMK General Council members, 1,741 filed affidavits in support of the ruling faction. The ECI in its order also stated that the AIADMK's flag, and office would also belong to the ruling OPS-EPS faction. The ECI said that it had used the same precedent that it followed in the case of the Samajwadi party and Janata Dal (United). PTI