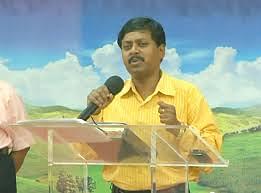 TN IAS officer Umashankar, who has often courted controversy for his evagelical activities, was rescued by a police team from irate relatives of a patient who raised serious objection to his ‘faith healing’ activities inside the Rajiv Gandhi Government General Hospital, leading Tamil daily Daily Thanthi reported.

According to the Thanthi report, trouble is said to erupted when Umashankar and his team of proselytisers attempted to provide ‘solace’ to a kidney patient in the name of Jesus. The relative of a kidney patient was enraged by this and called in his associates who gathered there and objected to religious activities inside hospital wards. They informed the police, seeking action against Umashankar and others.

A police team led by a sub-inspector arrived at the scene and requested the group to stop preaching if patients were objecting to it. During the enquiry, Umashankar revealed his identity and showed his identity card.

Despite repeated warnings by Tamil Nadu government to stop "preaching and propagating activities" and that action would be taken against him if he did not, Umashankar has been pursuing his evangelical agenda without any fear. The bureaucrat, continues to post healing videos to a popular page called DayofLord Jesus on YouTube,

In April 2019, Umashankar was sacked as as poll observer in the state of Madhya Pradesh after reports of his ‘faith-healing’ activities emerged. He was posed on electoral duty at the Sidhi constituency in the state. The state Election Commission had repeatedely warned him against conducting such activities but that did not deter Umashankar.

In 2015, the TN government had restricted him from preaching and propagating religion, which could create communal tensions after he participated in an ‘anti-homosexuality’ campaign run by ‘Tamil Nadu Christian Progressive Federation’, a quasi-socio-political fundamentalist outfit not much well known outside Kanyakumari district.

In the run up to the event, several posters, prominently placed in the public square screamed quoting a Biblical verse, called for killing those who indulge in homosexuality.

A convert from Hinduism, most of Umashankar’s prayer meetings are public displays of virulent Christian propaganda filled with apocalyptical imagery that warn the people of impending natural catastrophes passed off as a consequence of divine retribution. When disaster struck Uttarakhand, the civil servant gave an interview to a prominent Tamil tabloid close to DMK on his premonitions about impending disasters, saying that his Bibilical God is punishing the Indian Gods and that his God had warned him of such disasters. The IAS officer was categorical in his statement:“The countdown has started for huge disasters in the world. But of all nations India is going to suffer the worst of divine retribution for it is in India that idols are worshipped.”