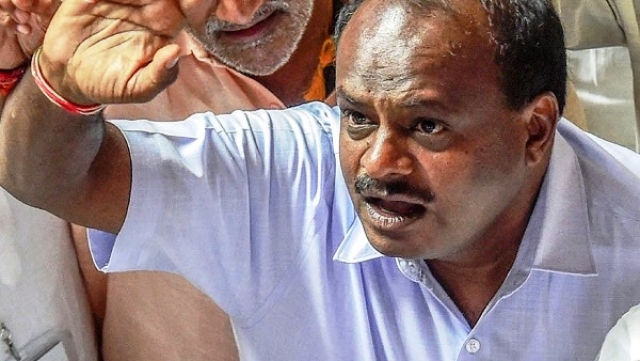 Karnataka Chief Minister H D Kumaraswamy blamed the EVMs for exit poll predictions which have projected a comfortable victory for the NDA government in the 2019 Lok Sabha polls, Deccan Herald has reported.

“The exit poll surveys on May 19 only reiterated the serious concern of the Opposition parties on misuse of vulnerabke EVMs for electoral gains by the ruling party”, Kumaraswamy tweeted on Monday (20 May).

Kumaraswamy also continued the “faulty EVM” bogey by reiterating the concerns raised by the opposition parties over the voting machines. He further alleged that the exit polls were designed to create an artificial impression of a Modi wave to “lure regional parties” ahead of the 23 May.

Kumaraswamy’s decision to blame EVMs for the exit polls doesn’t hold a lot of water as EVMs play no role in the said predictions which are carried out by psephologists by interviewing voters who have exercised their franchise.

Simply speaking, an exit poll usually involves a pollster quizzing a voter after he or she has cast their voters based on specific sampling methods developed by the particular polling agency. It is sometimes also carried out via random sampling which doesn’t necessarily involve voters outside polling booth.